ST. PETER OF DAMASKOS -ON JOY 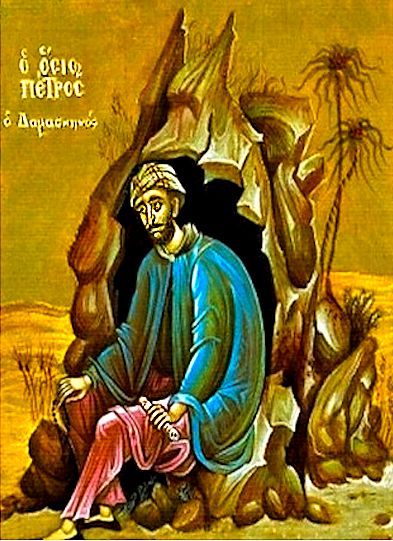 "Rejoice in the Lord," said St. Paul (Philemon 3:1). And he was right to say, "in the Lord." For if our joy is not in the Lord, not only do we not rejoice, but in all probability we never shall. Job, as he described the life of men, found it full of every kind of affliction (Job 7:1-21), and so also did St. Basil the Great. St. Gregory of Nyssa said that birds and other animals rejoice because of their lack of awareness, while man, being endowed with intelligence, is never happy because of his grief. For, he says, we have not been found worthy even to have knowledge of the blessings we have lost. For this reason nature teaches us rather to grieve, since life is full of pain and effort, like a state of exile dominated by sin. But if a person is constantly mindful of God, he will rejoice: as the psalmist says, "I remembered God, and I rejoiced" (Psalms 77:3). For when the intellect is gladdened by the remembrance of God, then it forgets the afflictions of this world, places its hope in Him, and is no longer troubled or anxious. Freedom from anxiety makes it rejoice and give thanks; and the grateful offering of thanks augments the gifts of grace it has received. And as the blessings increase, so does the thankfulness, and so does the pure prayer offered with tears of joy.

Slowly the man emerges from the tears of distress and from the passions, and enters fully into the state of spiritual joy. Through the things that bring him pleasure, he is made humble and grateful; through trials and temptations his hope in the world to come is consolidated; in both he rejoices, and naturally and spontaneously he loves God and all men as his benefactors. He finds nothing in the whole of creation that can harm him. Illumined by the knowledge of God he rejoices in the Lord on account of all the things that He has created, marveling at the care He shows for His creatures. The person who has attained spiritual knowledge not only marvels at visible things, but also is astounded by his perception of many essential things invisible to those who lack experience of this knowledge.

Thus he looks with wonder not only on the light of day, but also at the night. For the night is a benediction to all; to those practicing the virtues that pertain to the body it offers stillness and leisure; it encourages the remembrance of death and hell in those who grieve; those engaged in practicing the moral virtues it spurs to study and examine more closely the blessings they have received and the moral state of their soul. In the words of the psalmist, "As you lie in bed, repent of what you say in your heart" (Psalms 4:4), that is, repent in the stillness of the night, remembering the lapses that occurred in the confusion of the day and disciplining yourself in hymns and spiritual songs (Colossians 3:16) -- in other words, teaching yourself to persist in prayer and psalmody through attentive meditation on what you read. For the practice of the moral virtues is effectuated by meditating on what has happened during the day, so that during the stillness of the night we can become aware of the sins we have committed and can grieve over them.

When in this way through God's grace we make some progress, and discover that in truth and not just in fantasy we have realized in either action or thought some moral virtue of soul or body according to Christ's commandment, then we give thanks with fear and humility; and we struggle to preserve that moral virtue by means of prayer and many tears offered to God, disciplining ourselves to remember it lest we lose it again because of forgetfulness. For it takes much time to make a moral virtue effective in ourselves, while what has been achieved with so much time and effort can be lost in a single instant.

All this applies to those practicing the virtues. Where the contemplative life is concerned, the night supplies us with many themes for contemplation, as St. Basil the Great has said. First of all, it reminds us daily of the creation of the world, since all creation becomes invisible because of the darkness, as it was before it came into existence. This in its turn prompts us to reflect how the sky was empty then and without stars, as happens now when they become invisible because of the clouds. When we enter our cell and see only darkness, we are reminded of the darkness that was over the abyss (Genesis 1:2), and when suddenly the sky becomes clear again, and we stand outside our cell, we are struck by wonder at the world above, and offer praise to God, just as the angels are said in the Book of Job to have praised God when they saw the stars (Job 38:7). We see in the mind's eye the earth as it was originally, invisible and without form (Genesis 1:2), and men held fast by sleep as if they did not exist. We feel ourselves alone in the world like Adam and, united with the angels, in full knowledge we praise the Maker and Creator of the universe.

In thunder and lightning we see the day of judgment; in the call of cocks we hear the trumpet that will sound on that day (I Thessalonians 4:16), in the rising of the morning star and the light of dawn we perceive the appearance of the precious and life-giving Cross (Matthew 24:30); in men's rising from sleep we see a sign of the resurrection of the dead, and in the rising of the sun a token of the second advent of Christ. Some, like the saints caught up in clouds on the last day (I Thessalonians 4:17), we see go forth to greet Him with song, while others, like those who will then be judged, are indifferent and remain asleep. Some we see rejoicing throughout the day in the offering of praise, in contemplation and prayer, and in the other virtues, living in the light of spiritual knowledge, as will the righteous at the second coming; while others we see persisting in the passions and in the darkness of ignorance, as will sinners on that day.

In short, the man of spiritual knowledge finds that everything contributes to his soul's salvation and to God's glory: indeed, it was because of this glory that all things were brought into existence by the Lord and God of knowledge, as Hannah the mother of the prophet Samuel calls Him (I Samuel 2:3). "Therefore let the wise man not vaunt himself because of his wisdom," she said, "or the strong man because of his strength, or the rich man because of his wealth; but let him who boasts do so because of his understanding and knowledge of the Lord" (I Samuel 2:10). That is to say, let him boast because he knows the Lord with full understanding from His works, and because he imitates Him, so far as is possible, through the keeping of His divine commandments. For it is through them that he knows God and can "work judgment and righteousness in the midst of the earth" (I Samuel 2:10), as God does. Hannah spoke these words prophetically concerning the crucifixion and resurrection of the Lord. The gnostic's aspiration, too, is to suffer with the Lord through the acquisition of the virtues and to be glorified with Him through dispassion and spiritual knowledge, and to boast because of Him, in that, unworthy though he is, he has been enabled by grace to be a servant of such a master and an imitator of His humility. Then "Praise will come from God" (I Corinthians 4:5). But when will that happen? When He says to those on His right hand, "Come, you blessed, inherit the kingdom" (Matthew 25:34). May we all be found worthy to inherit that kingdom through His grace and love: to Him be gloy and dominion throughout the ages. Amen.