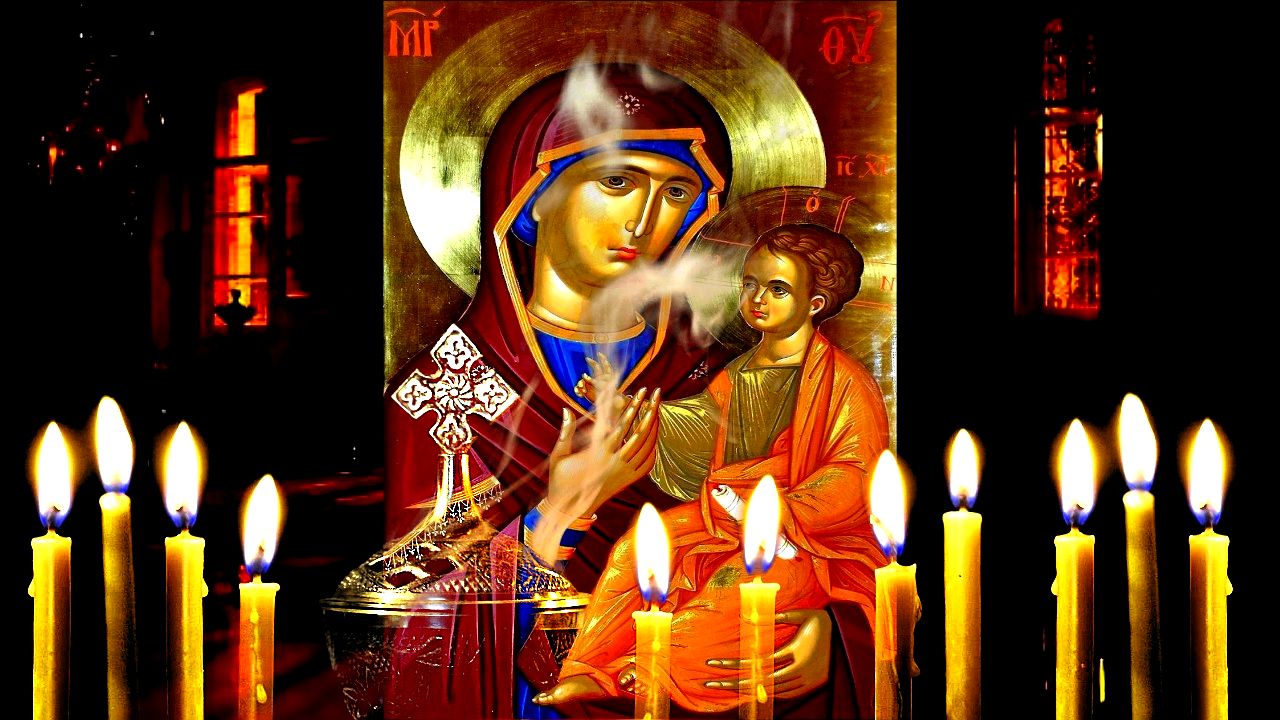 The Feast of the Holy Protection of the Theotokos 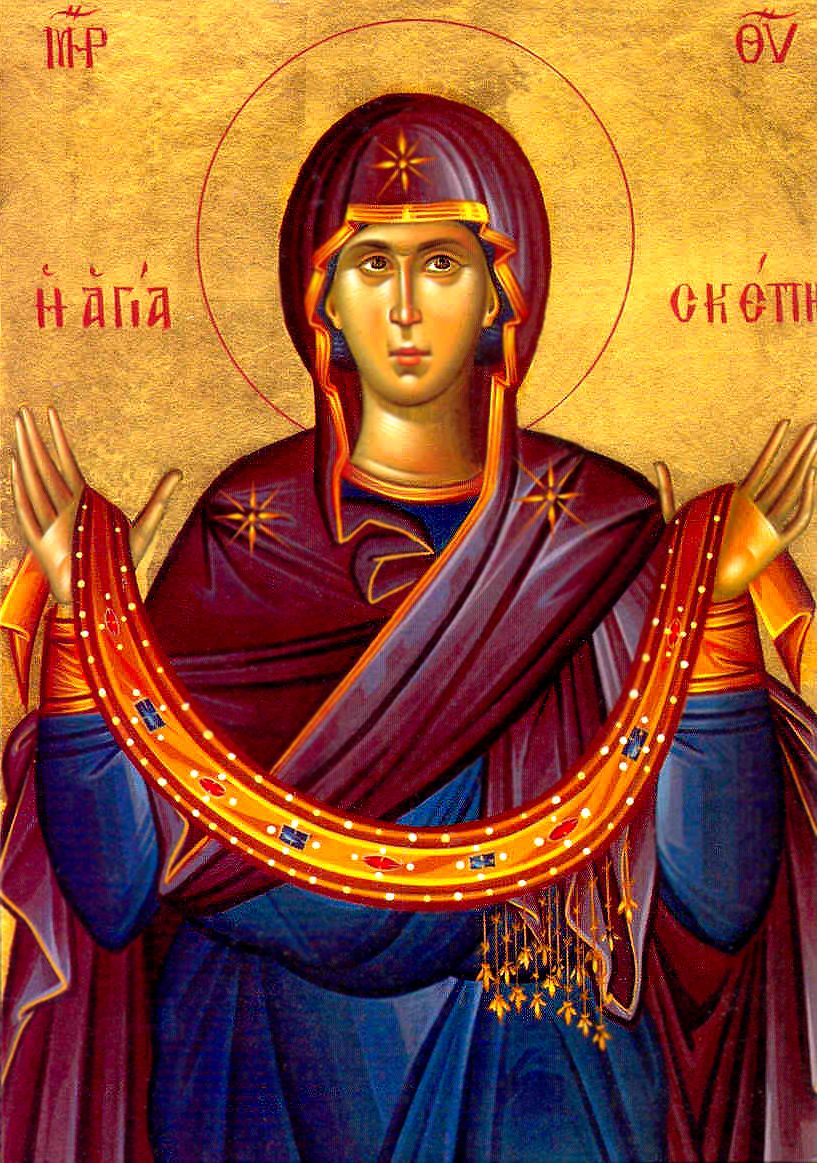 Note: the Church of Greece has moved the celebration of Agia Skepi to the 28th of October ("Oxi Day": http://en.wikipedia.org/wiki/Ohi_Day) in commemoration of the great help and protection of the Theotokos to the Greek nation throughout its history, and especially during World War II:

"The role of faith in Virgin Mary in Epirus is also outstanding during the Second World War. Her role was catalytic not only because she constituted the basis of people’s faith, but also because, with her miraculous interventions, she proved to have been the greatest ally of the Greek army on the snowy and rough mountains of Epirus.

Of course, miracles and apparitions were reported in many regions of Greece during the war, but at the front, at the Greek – Albanian borders and on Pindus, Virgin Mary was the protector and the leader of those who fought for their country under difficult circumstances. Their faith was so strong that they could see her encouraging them and “covering” them protectively, while they were fighting on the snowy mountains of Pindus and Albania.

The account given by Vassililki Bouri, niece of Spyridon Houliaras, who fought at the borders, is characteristic. According to it, Spyridon Houliaras used to narrate incidents of the war to his relatives before he died. The one that affected him the most, however, was a miracle of Virgin Mary. While the soldiers were fighting under really adverse conditions, Virgin Mary appeared in front of them and as a protector “covered” them with her mantle and led them towards their enemy, ready to confront them.

This miracle is also corroborated by the accounts of other soldiers of that time who fought on the mountains of Pindus. At the front, Greek soldiers saw the same vision everywhere: at nights, they could see a tall, slim woman figure walking with her kerchief resting on her shoulders. For the soldiers she was no other than Virgin Mary, the defender general of Greeks.

Tasos Rigopoulos, a soldier in 1940, reports from the front: I’m writing from an eagle’s nest 400 metres higher than the top of Parnitha. Everything around me is snowwhite. The reason I’m writing […] is to share with you what I’ve experienced, what I saw with my own eyes; something that I’m afraid you won’t believe if you hear it from others. A few moments before dashing against the blockhouses of Morova we saw a tall woman dressed in black standing still some 13 metres away. The guard yelled: “Identify yourself”. There was no answer. He yelled angrily once more. At that moment, as if struck by electricity, we all whispered: “Panaghia!”. She hurled herself at the enemy as if she had eagle wings. We followed her. We could constantly sense the bravery she was transmitting to us. We fought hard for a whole week until we finally took the Ivan-Morova blockhouses. […] She was always dashing forth. And when, victorious at last, we were advancing to defenseless Koritsa, our Defender turned into steam, smooth smoke, and vanished into thin air”. [11] On the mountain ridge of Ronteni, the soldiers of the 51st independent battalion, under the commands of major Petrakis also witnessed a miracle. From the 22nd of January and on, every evening at half past nine the enemy’s heavy artillery commenced fire against the battalion and the road that was used by transport vehicles. There was a lot of nervousness and heavy casualties. The daring scouts were unable to locate the enemy’s artillery. Apparently, the enemy was changing its position every evening. The situation was really desperate. It was an evening in February when the enemy artillery was heard firing once again. “Panaghia, help us, save us”, shouted the major spontaneously. Suddenly, a bright cloud came into sight from a distance, something like a halo was formed and the image of Virgin Mary appeared. She started bending towards the ground and stopped right over a ravine. Everybody in the battalion shivered as they witnessed the miracle. “Miracle!”, they shouted and they prayed. Immediately, they sent a message to the Greek artillery, the Greek canons fired, and right after that there was a silence. The Greek bombs had achieved a perfect strike. [11]

“No matter how faith is expressed during war, it is certain that it offers assistance to the soldier who is tested. And the image of the protector makes him hopeful and optimistic. …People from Arta, fighting at the front, were afraid neither of mortars nor of enemy bullets, as long as they had the image of Panaghia in front of them…”. [12] Yiannis Tsarouchis, after having painted “The Virgin of Victory” on the cap of a box of herring, having in mind a badly painted picture of the Virgin that was going around the camp, he was on his way to the commander of the battalion in order to present his work. The painting had already acquired a fame of being miraculous and on his way to the commander some soldiers from Arta “being in a state of religious excitement, demanded that the miraculous icon spend at least one night at their camp. All the soldiers were shouting: “The Virgin, the Virgin. Leave it here for one night”. Suddenly, the alarm sounded. […] we lied down, according to the orders we had. None of the soldiers from Arta did the same. “Hey! Comrade! How can you be scared when you hold the Virgin in your hands?”, one said”. [12]

It was also characteristic that on the military identification cards, right next to the personal details there was a picture of Virgin Mary. And just moments before they attacked, they would pray, shout “Panaghia mou!” (my Virgin) three times, and dash forth9.

The importance of Virgin Mary’s miraculous interventions was acknowledged right after the end of the Second World War. For this reason, the celebration of Agias Skepis, which in 626 A.D., when Her miraculous intervention saved Constantinople from the Avaroi (Turkish-Mongolian Nomads), was officially established to be celebrated on October 1st, was transferred in 1952 on the 28th of October to remind them of her miraculous intervention during the most difficult period for Greek people." (taken from: http://www.womanway.eu/studies/files/panaghia_teiep_en.pdf)

Apolytikion in the First Tone
O Virgin, we extol the great grace of thy Protection, which thou didst spread out like a bright cloud beyond all understanding; for thou dost invisibly protect thy people from the foe's every assault. Since we have thee as our shelter and certain help, we cry to thee with our whole soul: Glory to thy great deeds, O most pure Maid. Glory to thy shelter most divine. Glory to thy care and providence for us, O spotless one.

Kontakion in the Plagal of the Fourth Tone
Let us the faithful hasten to the Theotokos now and venerate her sacred veil, as we chant unto her, singing hymns to praise and honour her, as is fitting; for she shelt'reth with her shelter and all her faithful flock and preserveth them unharmed from all calamities, as they cry to her: Rejoice, Protection most radiant.
(taken from: http://goarch.org/chapel/saints_view?contentid=738)
Most-Holy Theotokos, save us!
Source-Fullofgraceandtruth.blogspots.ca
Posted by Tom Manakis at 10/27/2014 01:40:00 pm No comments: Links to this post