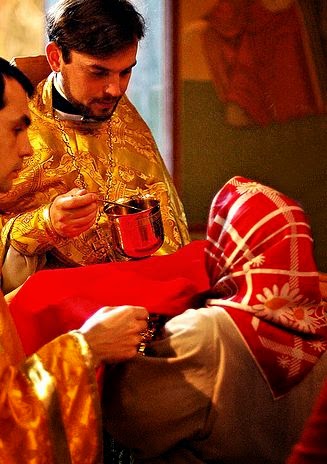 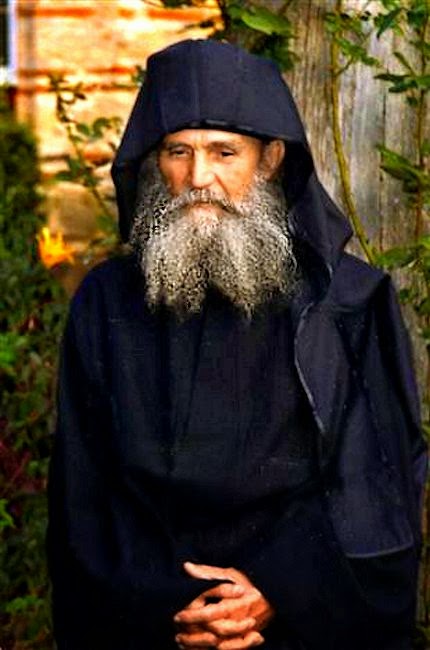 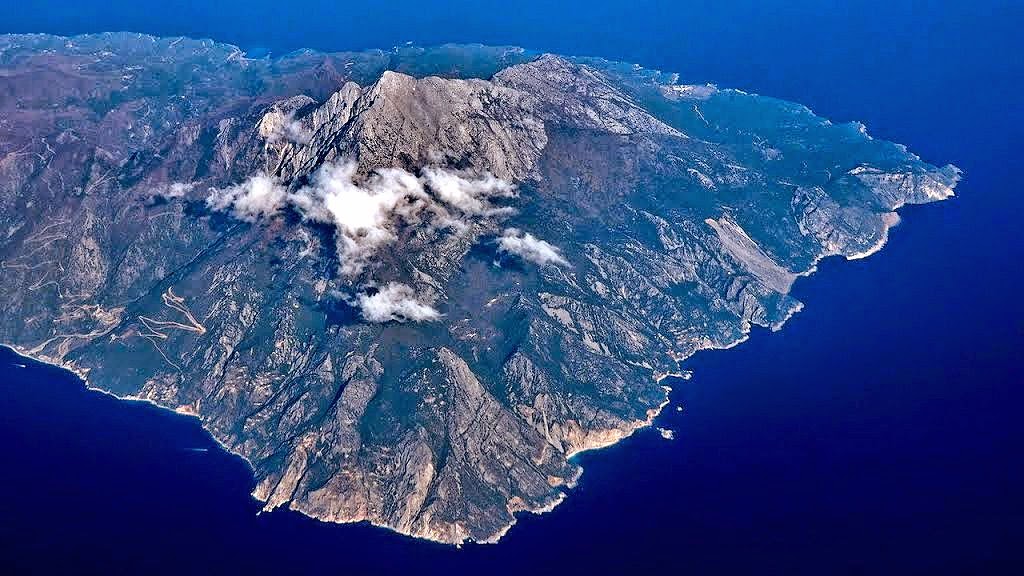 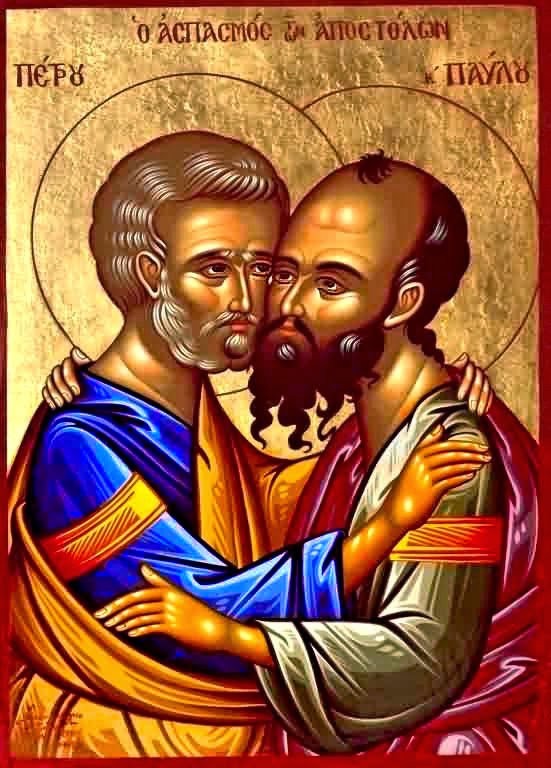 1. The commemoration of each of the saints on the appointed feast day is an occasion for town and country, citizens and their rulers to share in rejoicing, and brings great benefit to all who celebrate. "The memory of the just is praised", says the wise Solomon (Prov. 10:7 Lxx), "When the righteous is praised the people will rejoice" (cf. Prov. 29:2 Lxx). If a lamp is lit at night, its light shines for the service and enjoyment of everyone present. Similarly, through such commemorations, each saint's God-pleasing course, his blessed end, and the grace bestowed on him by God, because of the purity of his life, bring spiritual joy and benefit to the whole congregation, like a bright flaming torch set in our midst. When the land bears a good harvest everyone rejoices, not just the farmers (for we all benefit from the earth's produce); so the fruits which the saints bring forth for God through their virtue delight not only the Husbandman of souls, but all of us, being set before us for the common good and pleasure of our souls. During their earthly lives, all the saints are an incentive to virtue for those who hear and see them with understanding, for they are human icons of excellence, animated pillars of goodness, and living books, which teach us the way to better things. Afterwards, when they depart this life, the benefit we gain from them is kept alive for ever through the remembrance of their virtues. By commemorating their noble deeds, we offer them that praise which, on the one hand, we owe them for the good they did our ancestors, but which, on the other, is also fitting for us at the present time, on account of the help they give us now. 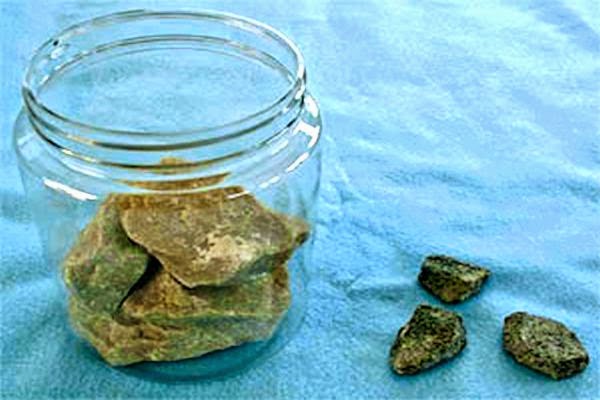 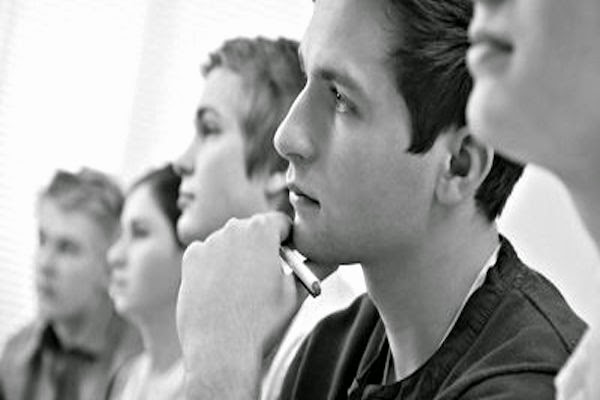 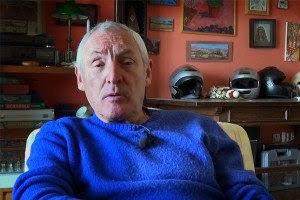 Klaus Kenneth explains how we live the civilization of pleasure and vanity. But this all is fake and the point is to find real pleasure and true glory.
Posted by Tom Manakis at 6/27/2014 08:26:00 am No comments: Links to this post 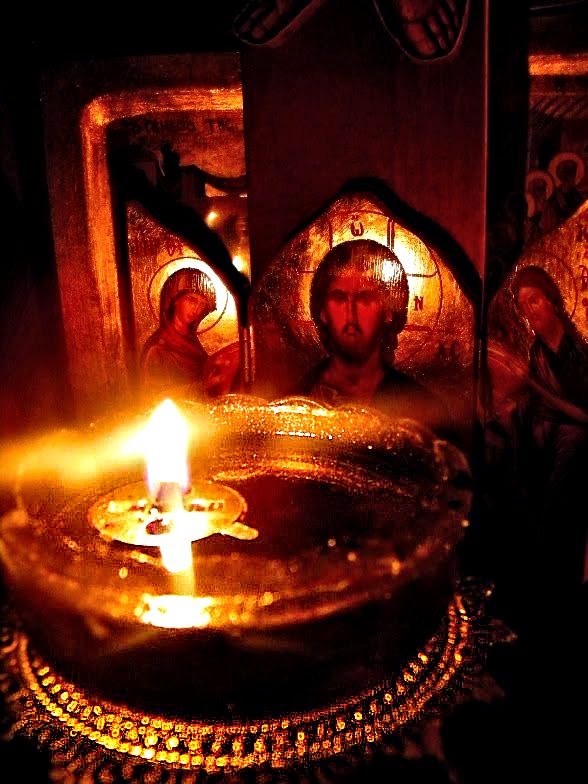 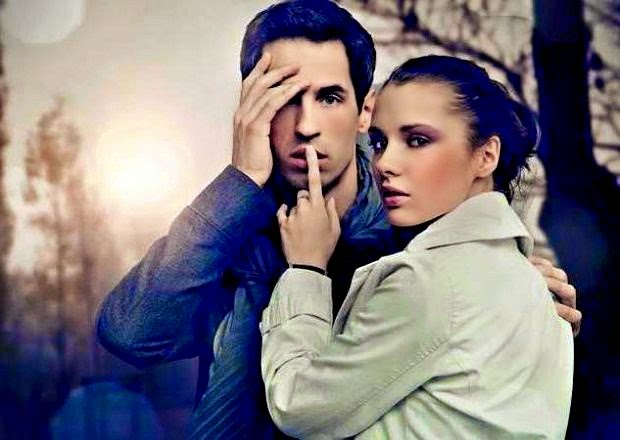 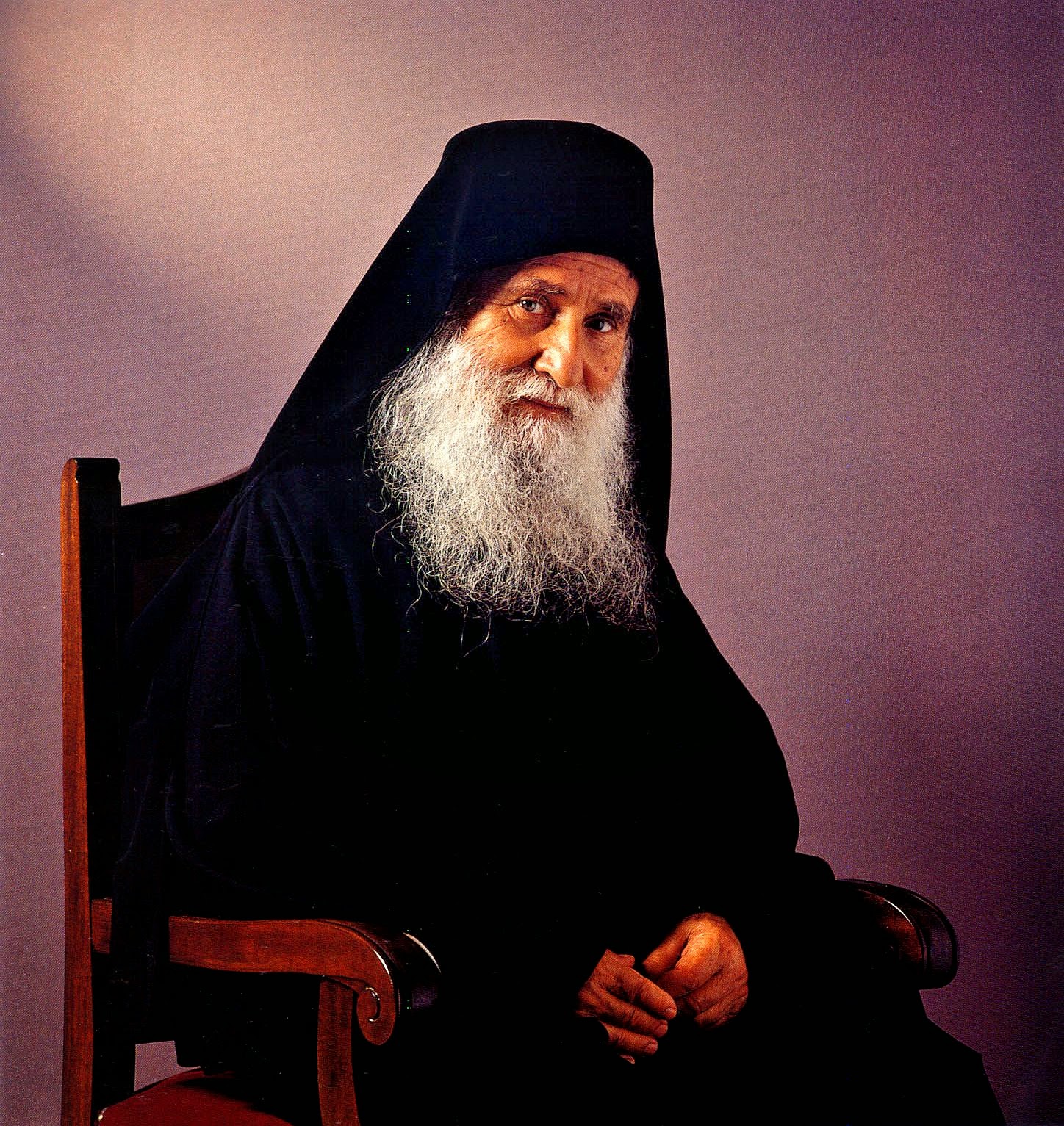 You see what a great thing is faith? This is precisely what God asks of humanity. And we continuously hear that beautiful hymn of the Apostle Paul. For it is not simply an epistle, or a letter, which was written by an illumined man. This is a God-revealed hymn: "[All the Saints] through faith subdued kingdoms, wrought righteousness, obtained promises, stopped mouths of lions, quenched the power of fire, escaped the mouth of the sword, were made powerful out of infirmities, became strong in battle. Women received by a rising again their dead, and others were tortured, not accepting the redemption, that a better rising again they might receive, and others of mockings and scourgings did receive trial, and yet of bonds and imprisonment; they were stoned, they were sawn asunder, they were tried; in the killing of the sword they died; they went about in sheepskins, in goatskins -- being destitute, afflicted, injuriously treated..."(Heb. 11:33-37). And as you know, the splendid hymn continues.

All these prizes, all these triumphs which renew and complete the relationship of the human race with God, were born from faith. This is what saves us. Faith is what extends to each of us, the choir of the faithful, and is what justifies everything.

We now come to a deeper mystery. All these Forefathers were those who were inclined towards revelation and hence to these people it was granted to be given the blessing; for God pre-ordained them and called them and dwelled among them, that He may boast of being their God. These also received the immediate promises and spoke face to face with God. And still all of these despite the certainty of the promises which were effectively revealed from above, won their divine reverence, their piety, and in general their turning to God, with a comprehensive cross, that is to say, with sadness, with grief, with persecution, with discomfort, and nearly expired from this world without seeing anything of all that which was promised by God, except for symbols and periods of various experiences. Do you see the mystery? In this valley of lamentations, the divine promises are partly seen, partly known, and partly revealed. This is precisely where we apply the following: "Whoever is wise, let him heed these things and consider the mercy of the Lord" (Ps. 106:43 LXX).

This is the way by which we the chosen through faith abide in and keep our relationship with God and His promises. Again, interpreting through faith, in the midst of immense long-suffering, patience and endurance, in the midst of the trials of temptations, we will be perfected like all the saints. 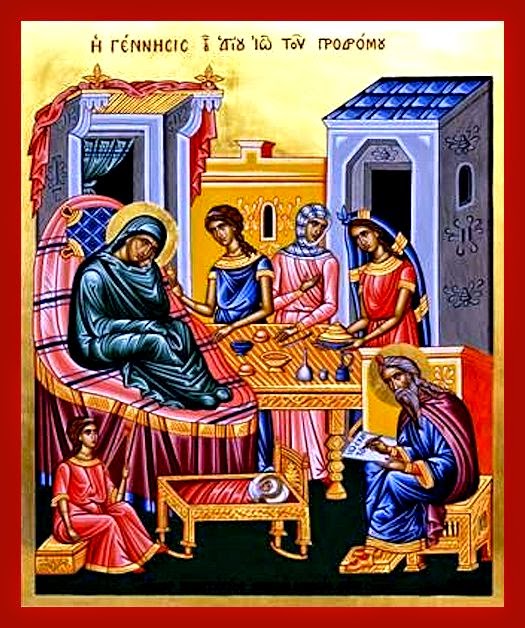 Homily on the Birth of the Honorable Forerunner John (by St. Luke of Simferopol) 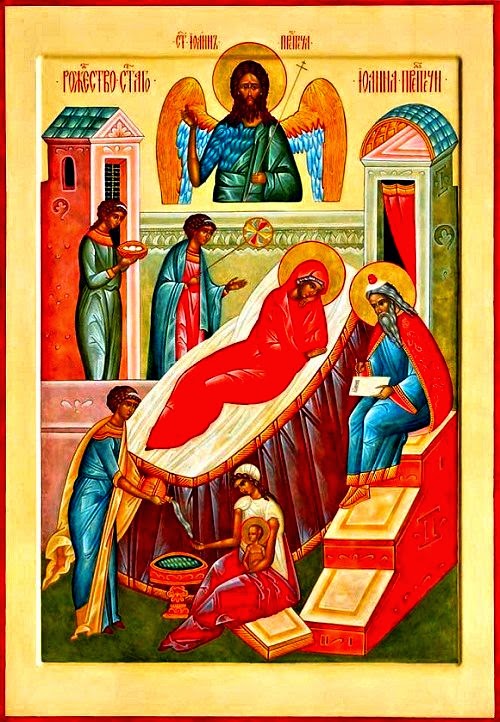 In the history of mankind there are only two major events which God announced by means of the Archangel Gabriel. These are the Birth of the Pre-eternal Son of God in the flesh and the birth of the Forerunner and Baptist John, the greatest of "those born of women" (Matt. 11:11), according to the word of the Lord Jesus Christ. The birth of the Forerunner follows the miracle of the loosening of the tongue of his father Zechariah, which the Archangel tied because he did not believe his words.

His birth was glorified with the prophetic word of Zechariah, who said: "And you, child, will be called the prophet of the Highest; for you will go before the face of the Lord to prepare His ways, to give knowledge of salvation to His people by the remission of their sins, through the tender mercy of our God, with which the Dayspring from on high has visited us; to give light to those who sit in darkness and the shadow of death, to guide our feet into the way of peace" (Lk. 1:76-79). 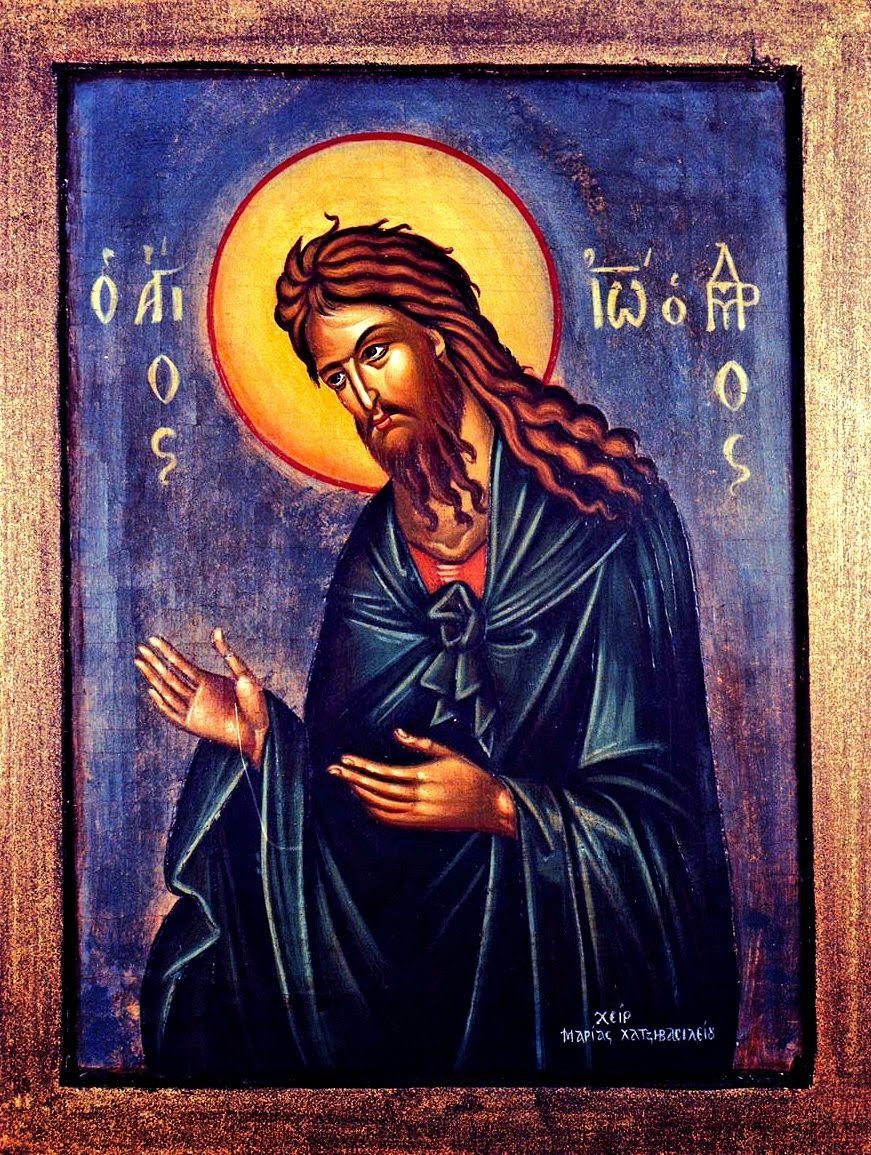 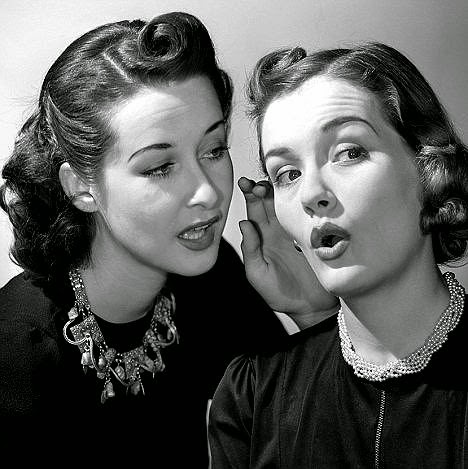 Metropolitan Hierotheos of Nafpaktos -On The Mystery of Baptism 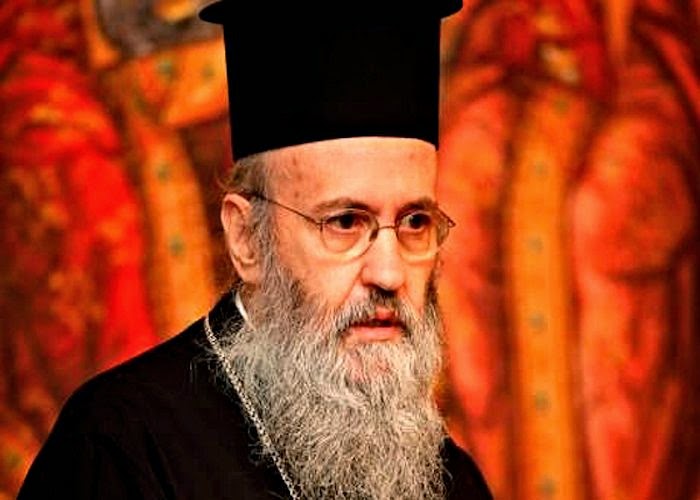 by Metropolitan Hierotheos of Nafpaktos.

b) The Mystery of Baptism 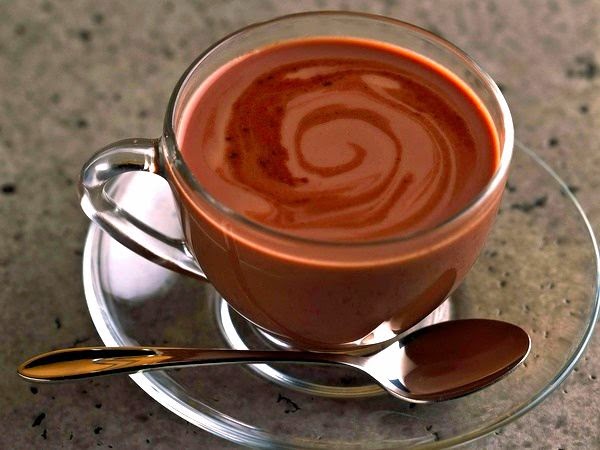 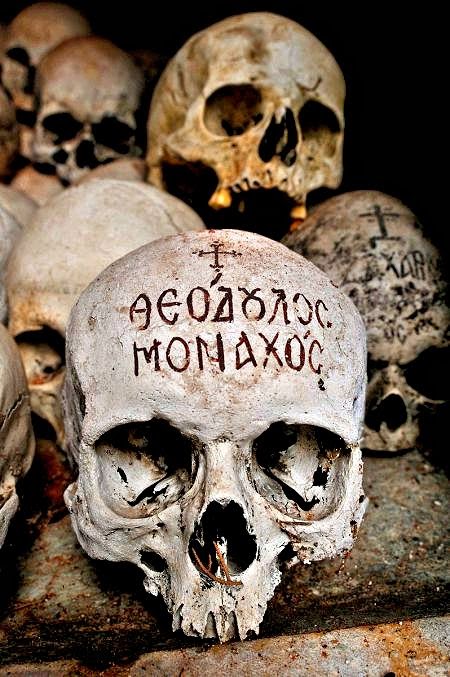 (Skulls of the monks on Mt. Athos, Greece)

From the time we’re created, each individual has a particular mode of existence, which is not extinguished when we die. Saint John the Damascan says that the union of soul and body occurs at the beginning of our formation. ‘Body and soul are formed at the same time’. This specific persona of each individual is not dismantled even on our death. The soul may indeed be separated from the body at death, but the personhood remains the same.
Each person is a unique and inimitable personality. This special individuality, this specific persona, never ceases to exist. This is why, in the parable of Dives and Lazarus, the Lord says that the rich man saw Lazarus in the bosom of Abraham, not merely Lazarus’ soul.
The aim of the divine incarnation was to bring fallen humankind into their inheritance in the Kingdom of Heaven. This is why all the Fathers declare that the Word of God became human in order to deify human nature.
When we talk about the deification (glorification) of human nature, we agree that the righteous become sharers in divine nature, although always with the proviso that their human nature isn’t obliterated, but participates in the divine glory of our inapproachable God to the extent that we’re able to do so.
In other words, the individuality of each person is retained, elevated through the resurrection, approaches divine glory, but still remains finite.
And all of this depends on the incarnation of the Divine Word. Jesus Christ, the second person of the Holy Trinity, took human nature upon Himself and united with it as a Person and a Persona. Both natures remained unconfused. When the flesh was deified, it didn’t lose its own nature. This is Jesus, perfect God and perfect human. It was over the dogma of the two natures and one hypostasis of Christ that all the battles with the Monophysites were fought.
By grace, not by essence, the righteous take part in divine glory and communion, but each person continues to retain his or her personality. But this is where God’s magnificent and infinite wisdom and loving-kindness come in.
The Word as infinite God ‘dwells in inaccessible light’ (I Tim. 6, 16) and no-one can approach His divine brilliance, but all of us saved Christians are united to His divine human  nature, and, all together constitute His body, ‘the fullness of Him who fills all in all’ (Eph. 1, 23).  Since Christ is the Head of the Church and we are the members, then the body becomes perfect when we’re all united in Christ. The Church is His body, the fulfilment of Christ as a person.
What has been said so far is enough to prove that the incarnate Word of God is the root cause of the fact that people retain their personalities even after death. This becomes even clearer from the teachings of the holy Fathers.
This indissoluble persona, consisting of the soul and the body, is described for us by Gregory the Theologian in his funeral oration for his brother Kaisarios: ‘I await the voice of the Archangel, the last trump, the transformation of the heavens, the alteration of the earth, the liberation of the elements, the renewal of the world. Then I’ll see Kaisarios himself, without having died, without us accompanying him to the tomb, without lamentation, without us feeling sorry for him. He’ll be bright, glorious, elevated…’
The notion that the separation of the soul from the body doesn’t eradicate a person’s individual identity is also accepted by Saint Gregory of Nyssa. In his dialogue with his sister, Saint Makrina, he uses two wonderful examples and with stunning precision demonstrates that the soul always recognizes its own body, both as it was when they were united and after their separation.
He uses an example from painting. In order to paint a subject, the artist mixes a variety of colours, but can still discern the individual colours he’s applied in making the mixture.
A second example he uses is from pottery and again demonstrates that the soul has no difficulty in identifying its own body, even when it’s mixed with other, foreign elements. Ceramic objects are made from the same clay. The potter creates a variety of objects which don’t have the same form or the same use. A pitcher is one thing, a wine-jar another and a plate something else. All of these objects have their own shapes and particular features, by which they’re recognized by their owners.
And then again, if they’re broken, they can be mended and become recognizable: which bits belongs to the wine-jar, to the pitcher, to the cup. And if the broken pieces get mixed up with unworked clay, then it’s even easier for the owner to recognize the baked pieces.
From the above we can understand very clearly that death, that is the separation of the soul from the body, doesn’t eradicate a person’s individual identity. People stay the same.
The separation of the soul from the body is temporary and lasts as long as they’re in what we call the middle situation of the departed. At Christ’s second coming, the soul and body will be united. We shall rise, with new bodies, not subject to decay, as Saint Paul teaches us: the Lord ‘will transform the body of our humiliation so that it may be conformed to the body of His glory’, (Phil. 3, 21).
And Saint Makarios the Egyptian affirms the permanent integrity of human nature with great clarity: ‘At the Resurrection, all the members rise and not a single hair is lost, as has been written, “Not a hair of your head shall be lost” (Luke 21, 18). And everything will be lambent, bathed in light and fire and transformed, not, as some say, broken up and consumed by the fire so that their nature no longer exists. Because Peter’s still Peter, Paul Paul and Philip Philip. People remain in their own nature and specific identity, filled with the Holy Spirit’. 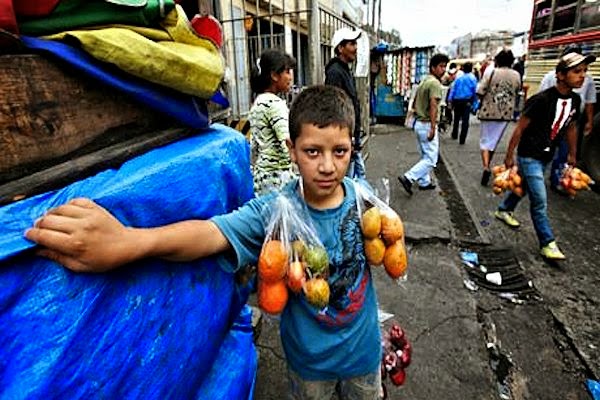