The Great Wager between Believers and Unbelievers 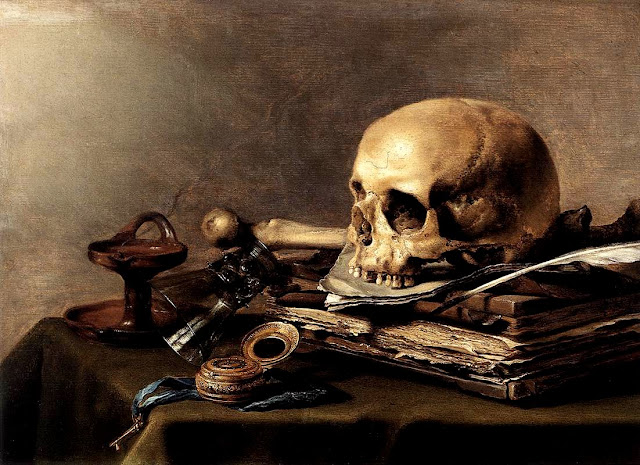 By Photios Kontoglou, from his book Mystical Flowers, Athens, 1977

By St. John Chrysostom, extracted from his homilies “On Fasting”

How the Jesus Prayer DIffers from the Hindu Mantra 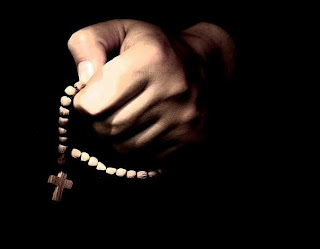 One of the greatest spiritual gifts that Elder Paisios gave me was his guidance along the mystical path of the Jesus Prayer. This started at the beginning of our acquaintance and continued until his repose twelve years later. The Jesus Prayer consists of the repetition of the phrase "Lord Jesus Christ, have mercy on me."' The Jesus Prayer is not recited as a Mantra, but as a prayer to the Person of Christ.

Prayer, as I learned, is a relationship between two persons, God and man, who move towards each other. Thus, the swiftness or slowness with which a person advances in prayer depends on both the human and divine wills. Neither the freedom of God in His sovereignty nor the freedom of man in his free choice are ever violated. For his part, man offers his good intention, his labors, and his desire to draw near to God. God, in turn, offers His grace...

First, consider how the Orthodox tradition understands the meaning of the Jesus Prayer: "Lord Jesus Christ, have mercy on me." The word "Lord" is the name for God most frequently encountered in the Old Testament in the oft-repeated formula "Thus saith the Lord ..." or in the commandments: I am the Lord thy God. When Orthodox Christians call Jesus Christ, "Lord," they are confessing that He is the God of the Old Testament Who spoke to the patriarchs-Abraham, Isaac, and Jacob. The Word is the Person who gave the law to Moses. In other words, the One who spoke to the prophets was none other than the second Person of the Holy Trinity, Who later took flesh and was united with human nature in the Person of Jesus Christ. Furthermore, when we say "Lord Jesus Christ"-with faith, with all our heart's strength-we come under the influence of the Holy Spirit, as Saint Paul says: No man can say that Jesus is the Lord but by the Holy Spirit (1 Cor 12:3).

Having recognized the existence of the true personal God outside and beyond his own self, from this God a Christian asks "mercy." The elder once told me, "Mercy contains all things. Love, forgiveness, healing, restoration, and repentance all fit within the word 'mercy."' It is the mercy of God that brings about repentance, purification from the passions, the illumination of the nous, and, in the end, theosis. From my journey I have learned that salvation comes from the mercy of Christ, the unique Savior of mankind, rather than from my intelligence, my prideful endeavors, or the techniques of yoga. Salvation and theosis are so very precious that it is impossible for anyone to make any effort or do any ascetic labor that would be equivalent to even the smallest fraction of their value.

Indeed, from my conversations with other fathers who were laborers in the Jesus Prayer and from my own experience, I know full well that prayer is a gift from God. Nothing is accomplished by human labor alone, for Christ said, Without Me ye can do nothing (John 15:5), and as the Apostle James bears witness, Every good gift and every perfect gift is from above, and cometh down from the Father of lights (James 1:17) Even as God granted us existence, in the same way He gradually grants us to know Him and be united with Him through prayer, leading us ultimately to life eternal. 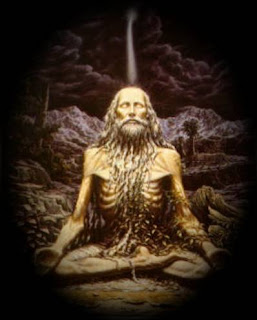 Now, consider how the yogis view a mantra. First of all, there are many mantras, and each refers to one of the many gods of the Hindu pantheon such as Krishna, Rama, Vishnu, or the goddess Kali. There is not one standard explanation given by yogis for the mantras; rather, their explanations are tailored to the receptivity of each listener. For beginners who are not disposed to worship idols, yogis give a pseudo-scientific, mechanistic explanation: they claim that the benefit accrued by repeating the mantra is due to certain frequencies produced by its pronunciation, which cause spiritual vibrations that activate spiritual centers within man. (However, the existence of such centers in man can only be taken on faith-if someone willingly chooses to believe such a claim.) For those who are inclined towards psychological interpretations, the yogis present the repetition of a mantra as a type of auto-suggestion that enables the practitioner to program his inner world according to positive models. When addressing those who have become more involved with Hinduism and now believe in many gods, the yogis claim that the worshipper receives the blessing of whatever god is being invoked.

What constitutes the infinite distance separating the Christian Jesus Prayer from the Hindu mantra, however, is that which lurks behind the name of the god being invoked in a mantra and invited into the soul. Through the mouth of the Holy Prophet David, God declares, All the gods of the nations are demons (1 Psalm 95:5)––In other words, behind the names Krishna, Rama, or Shiva are demons lying In wait. Once they are invoked by the use of the mantra, the door is open for the devil to begin his theatrical productions, using sounds, images, dreams, and the imagination in general in order to drag the practitioner deeper into deception.

Another significant difference between the Christian Jesus Prayer and the Hindu mantra is the diametrically opposed viewpoints of the two faiths regarding techniques and the human subject. I recall a conversation I had with Niranjan after he had given me permission to begin to practice some supposedly powerful yoga techniques. I said to him, "It's fine practicing the techniques, but what happens to the human passions of greed, lust for power, vainglory, and selfishness? Aren't we concerned about them?" "They disappear," he replied, "through the practice of the techniques." "Do they just disappear like that, on their own?" I asked. "Yes, they disappear automatically, while you are practicing the techniques."

What an astonishing assertion: physical exercises can wipe out the inclinations that a person's soul acquired in life through conscious choices. But, in reality, man, as a self-determining and free moral agent, can change the conscious aspect of his personality and his moral sense only by the use of his own free will to make conscious decisions in real-life situations. Any external means to automatically induce such a change in a person's consciousness without his consent circumvent man's free will, obliterate his volition, and destroy his freedom, reducing man to a spineless puppet manipulated by a marionettist's strings. Hinduism's relentless insistence on properly performed techniques with automatic results degrades man by depriving him of his most precious quality: the self-governing free will. It restricts the boundless human spirit within a framework of mechanical methods and reflexes.

Orthodox Christian Faith, on the contrary, recognizes and honors the gift of human freedom as a divine trait. This recognition and approach help man to be actualized as a free being. Precisely on account of the human freedom to choose, man's often- unpredictable responses can't be limited to the mechanical reflexes of a closed system, but can innovatively turn in any spiritual direction that he, as a free subject, wills. This is why Orthodoxy is not adamant about techniques and methods. In freedom and with respect, Orthodoxy seeks the human heart, encouraging the individual to do what is good for the sake of the good, and pointing out the appropriate moral stance of the soul before God, which an individual can then freely choose to embrace.

Genuine spiritual development entails a deepening familiarity with God and with one's own self, acquired through moral choices that a person freely makes in the depths of his heart. Spiritual progress is a product of man's way of relating to himself, to his fellow man, and to God by the good use of his innate moral freedom. This is why Christ calls out, If any man wills to come after Me, let him freely deny himself (Matt 16:24)––that is, without being deceived, without being psychologically compelled, and without being forced, all of which are inappropriate to the spiritual nobility of Christian life.

Father Porphyrios had a small parrot that he taught to pray in order to illustrate the absurdity of some Christians' empty repetition of the words of prayer, as well as the ridiculousness of the opinion commonly presented in Eastern religions that someone can make moral advances by physical exercises or breathing techniques. Every so often, the parrot would mechanically say, "Lord, have mercy." The elder would respond, “Look, the parrot can say the prayer, but does that mean that it is praying? Can prayer exist without the conscious and free participation of the person who prays?"

How to Recognize Vainglory- Elder Paisios 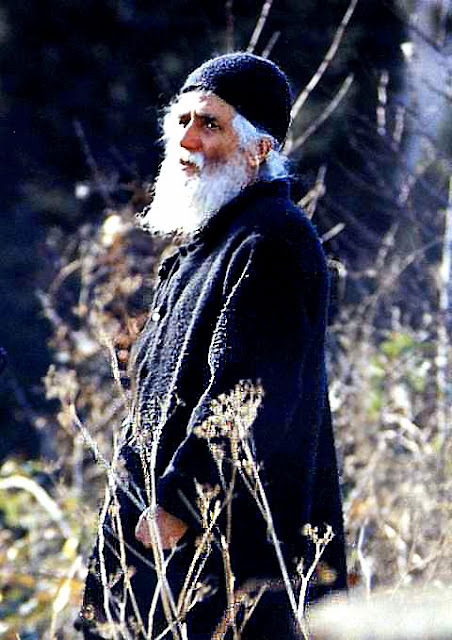 Often in our spiritual practice we find ourselves struggling. We try and try but the effort seems so hard. What is the problem? Why do we often feel anxious that our efforts do not yield the results we seek? Why does God seem distant and unreachable even when we try so hard?

Elder Paisios gives us some insight into this common problem.

We need to be careful in our spiritual life. When spiritual people are affected by vainglory, they feel very little satisfaction, and they are left with a sense of emptiness in their heart. There is no fulfillment, no rejoicing of the heart, and as their vanity increases, the emptiness inside makes them suffer even more. Where there is anxiety and despair, there is a demonic spiritual life. You should not feel anxiety over anything at all. Anxiety comes from the devil. Wherever you see anxiety, you must know that the devil has been at work. The devil will not go against the current. If there is a predisposition, he will push in that direction in order to cause us trouble and deceive us.

When in the course of our spiritual struggle we feel anxiety we must know that we are not moving within the realm of God...

In other words, one should not strive with an unhealthy fastidiousness... Christ is full of love, kindness and consolation and He never stifles, but gives abundant oxygen and divine consolation.

So what do we do to avoid this condition. We must be kind to ourselves and accept that we are prone to make mistakes, to be tired. We need to have humility and set aside our self-proclaimed righteousness depending on our own efforts.

Elder Paisios advises us to live the spiritual life not in our minds, but in our hearts. He says,

Never do a job without putting your trust in God with great humility, because otherwise you will agonize and you will tire your mind and soul. It is a lack of faith that hides behind anxiety, but pride can cause anxiety also.

If you cannot complete your required prayer rule, don't force yourself through your own efforts. Relax and turn to God. If it is because you are too tired to complete it, ask God's forgiveness and get some sleep. Then the next day arrange your schedule so that you will not be in this same condition again. Entrust everything to God and God will guide you.

The Elder tells us to keep the mind always close to God. This applies to all situations where you are having difficulty in completing your task. Trust in God and seek His help.