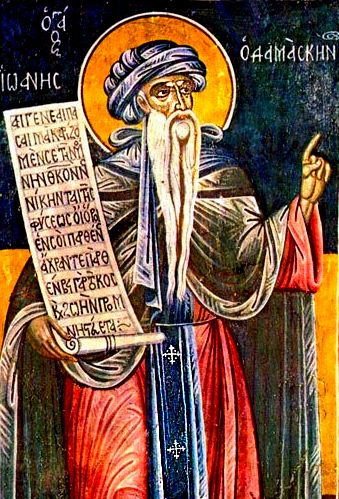 St. John of Damascus 676-749
It is not without reason or by chance that we worship towards the East. But seeing that we are composed of a visible and an invisible nature, that is to say, of a nature partly of spirit and partly of sense, we render also a twofold worship to the Creator; just as we sing both with our spirit and our bodily lips, and are baptized with both water and Spirit, and are united with the Lord in a twofold manner, being sharers in the mysteries and in the grace of the Spirit.
Since, therefore, God is spiritual light 1 John 1:5, and Christ is called in the Scriptures Sun of Righteousness Malachi 4:2 and Dayspring , the East is the direction that must be assigned to His worship. For everything good must be assigned to Him from Whom every good thing arises. Indeed the divine David also says, Sing unto God, you kingdoms of the earth: O sing praises unto the Lord: to Him that rides upon the Heavens of heavens towards the East. Moreover the Scripture also says, And God planted a garden eastward in Eden; and there He put the man whom He had formed Genesis 2:8: and when he had transgressed His command He expelled him and made him to dwell over against the delights of Paradise , which clearly is the West. So, then, we worship God seeking and striving after our old fatherland. Moreover the tent of Moses Leviticus 16:14 had its veil and mercy seat towards the East. Also the tribe of Judah as the most precious pitched their camp on the East. Numbers 2:3 Also in the celebrated temple of Solomon the Gate of the Lord was placed eastward. Moreover Christ, when He hung on the Cross, had His face turned towards the West, and so we worship, striving after Him. And when He was received again into Heaven He was borne towards the East, and thus His apostles worship Him, and thus He will come again in the way in which they beheld Him going towards Heaven Acts 1:11; as the Lord Himself said, As the lightning comes out of the East and shines even unto the West, so also shall the coming of the Son of Man be Matthew 24:27 .
So, then, in expectation of His coming we worship towards the East. But this tradition of the apostles is unwritten. For much that has been handed down to us by tradition is unwritten. (An Exposition of the Orthodox Faith Bk. IV.12)
Posted by Tom Manakis at 2/19/2013 11:00:00 am No comments: Links to this post 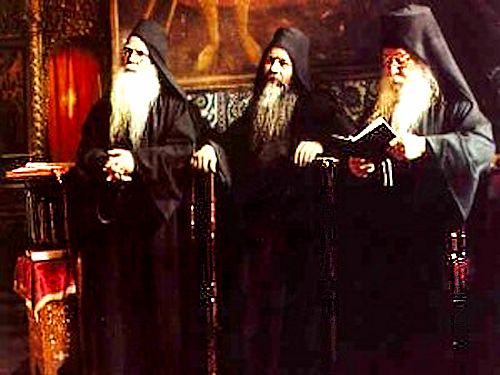 St. Nicodemus the Hagiorite 1749-1809
Compunction and tears are engendered by the outwards postures of the body; that is, when one prays with head uncovered; when he has the attitude of a condemned man standing before the judge; when he smites his breast like the Publican; when he keeps his eyes inclined downwards; when he gathers his thoughts in his heart; when he stands upright in his Stasidion. Indeed, Stasidia were designed for this very purpose, to support the arms of Christians and to maintain them in the posture of one praying throughout the time that they are standing in Church. This would be impossible if there were no Stasidia, since the arms of those at prayer would become weary if held up to God for a long period of time. That lifting the hands in prayer was a custom of the Prophets and Apostles is attested, on the one hand, by the Divine David, who says, “Let my prayer be set forth before Thee as incense, the lifting up of my hands as an evening sacrifice,” (Ps. 140:2) and, on the other hand, by the great Paul, who says, “I desire therefore that men pray in every place, lifting up holy hands, without wrath and disputing” (1 Tim. 2:8). To put it briefly, Stasidia sustain Christians in Church in the form of one crucified, and through such a form of the Cross Christians overcome the passions and the demons, invoking the help of the crucified Savior. In this way, Moses, held up by Hur and Aaron in the form of a Cross, overcame the Amalekites (Exo. 17:11-12). These outward and venerable postures, I say, give rise to compunction and tears in prayer. For the soul within conforms to the outward postures of the body, according to St. John the Ladder, who says: “The soul imitates the activities of the body, is molded in accordance with what the whole body does, and is made to conform thereto” (Ladder, 25). (Christian Morality pg. 492)
Posted by Tom Manakis at 2/19/2013 10:51:00 am No comments: Links to this post

How the enemy keeps in his nets those who have realised their perilous position and wish to be free of it, but make no move. And the reason why our good intentions are so often not fulfilled 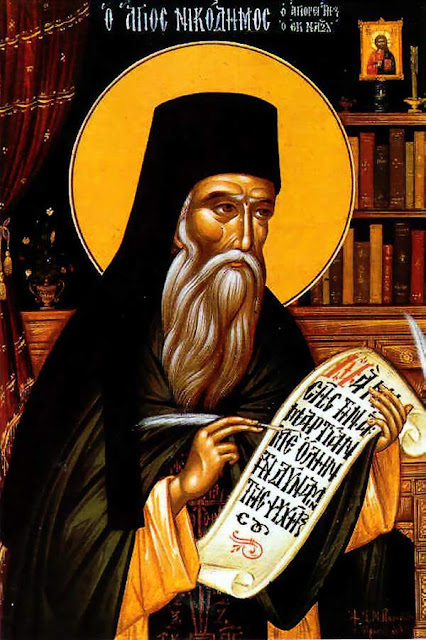