Elder Arsenie (Papacioc) -God is Where There is Humility 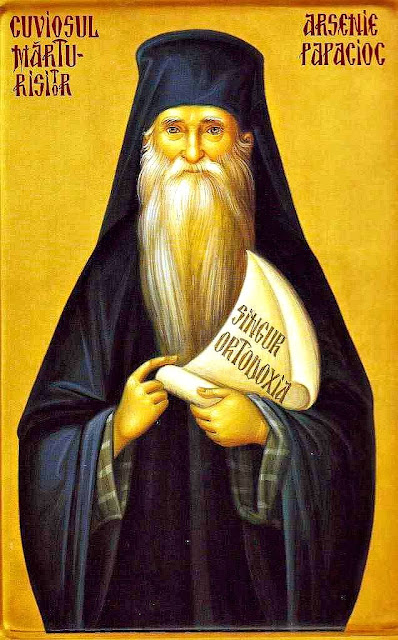 —Fr. Arsenie, tell us, how can we be saved from our many earthly cares, so that we might have more time for prayer?
—Fr. Ioannichie, pure prayer from the heart and lips to God is a great work! Prayer is a sharp arrow that all the saints have aimed at heaven for thousands of years, and not only they, but also the simplest Christians. Prayer has pierced the heart of the heavens, perhaps it has reached those who were displeased with the earth's inhabitants, and salvific replies have returned along the same path; thus was faith preserved on earth from generation to generation.
Brother Christian, you also have your own history: you have entered into the great Christian union—the Church—and are forever redeemed by the Savior's sacrifice. That means that you are of great worth, and you have a great and noble responsibility. Is it so difficult for each of us to simply and directly ask God to help us in our troubles and sufferings, and to thank Him?!
Where is the man who has nothing to ask of our Lord Jesus Christ and the Mother of God? They say that the Mother of God is offended by those who never ask her for anything! She is the prayerful intercessor for people; and as much as God can do through His power, so much can the Mother of God do by Her prayer. Show that you are the child of the Mother of God, having a child's heart in your breast!
And we can be free of earthly cares only if we want to be—after all, our salvation depends upon us. As souls given by God, we must show more will, in order not to immerse ourselves in these earthly cares and burden ourselves with them to such an extent. We shall manage our lives as people of higher thought, and as responsible human beings. If we were to ask those who are saved and living in heaven, "What did it cost you to attain such blessedness?" they would reply, "Time, a little time well spent on the earth!" That means that we have absolutely no other time to bring our souls to perfection—souls that are called, gifted, and full of such resolve.
We must think about the fact that we are called "the angelic ranks" [the monastic rank is called the angelic rank. –OC]. Angels pray unceasingly, throughout eternity.
—What is the easiest way to overcome in the struggle against fornication and fleshly thoughts?
—In order to overcome in the struggle against fornication, in whatever stage it may be, we must first of all ask for grace from the Good God. This is not a short term battle, because we must definitely achieve total victory. At first, each one sees that he is powerless to withstand it; but with God all things are possible.
He who enters into this struggle must:
–want to be freed of this struggle, no matter what happens;
–pray with all his heart to the Mother of God, and ask her help;
–avoid, as much as possible, all circumstances that might arouse passions;
–do not accept into your mind those suggestions that might seem innocent, but then begin to solidify into images. Route all these thoughts, changing your mind to prayer—but your own prayer, and not something someone else recommended, no matter who that might be; into prayer with your own sighing, even if it is without words.
If the attack is aggressive, pleasurable, and vanquishing, one must call out to the Mother of God, and not give in. During the first phases, he should confess contritely and purely, not sparing himself and not blaming incidents, circumstances, or other individuals. He will be greatly helped if he goes to confession often.