The Sacred Icons and the Holy Cross 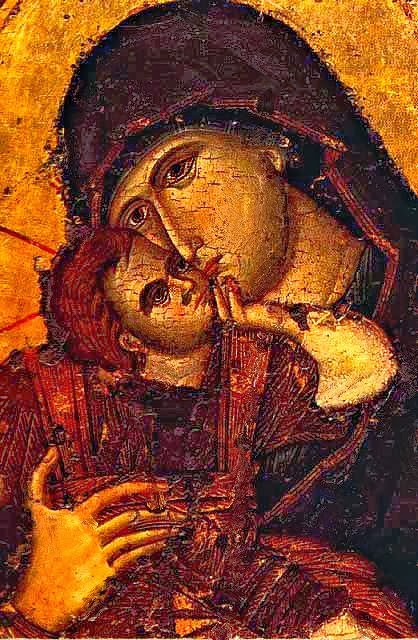 God is the unique Being, the absolute existence; nothing can be compared with Him and the honor which is due Him, i.e. worship and adoration, is rendered unto none other; neither to some non-existent god nor to some idol.
But God's grace is transmitted in every way in accordance with His will; even through material objects or even through the shadow of holy men, as was the case with the shadow of the Apostles, which is their imprint, a type of image (Acts 5, 12-16. 19,11-12).
In the Old Testament some of the objects which transmitted the miraculous grace of God were the bronze snake of Moses, the Ark of the Covenant, the sheep-skin coat of the Prophet Elias, et al. Every desecration of the sacred objects was severely punished by God (see Num. 10,15-20. I Kings 5, 2-4).
The teaching of the Orthodox Church concerning the holy icons has a Christological foundation. God is by essence unapproachable; He can neither be expressed by words nor depicted. The Son and Word of God, how­ever, became man and we beheld His glory (Jn 1, 14). Thus we can depict the person of Christ which consti­tutes the visible sign of the invisible presence of God, an "image of the invisible God" (Col. 1, 15). In the Ortho­dox Church that which is seen can be depicted; we express the same confession of faith either by written or oral word and even by depiction. The icon of Christ constitutes the confirmation of the incarnation of the Son and Word of God, which was a totally real, and not a docetic or imaginary, one.
Through the sacred icons we express our internal desire to grow in the love of Christ and the saints, to attain to the "new creation in Christ" and to become "conformed to His image" (Rom. 8,29). Just as the word sanctifies our lips, in a like way the icon, which trans­mits the same meaning as does the word, sanctifies our eyes and our mind.
The icons of the saints refer to "the new man" and are a declaration of our belief in our transformation in Christ and in the incorruption of man and the entire world. They do not refer to the "beauty" of this world, but rather symbolize the beauty and the glory of the "future age". This is why the holy icons lack the dimen­sion of "depth" and are two-dimensional. They proclaim a transfigured world which however we observe "as through a mirror" (I Cor. 13, 12). The holy icons give us the feeling that there exists a new world that is being transformed, and they constitute the assurance of our hope, expressed in the words of our Lord: "Behold I make all things new" (Rev. 21,5).
The honor rendered to the holy icons is placed within the framework established by the Seventh Ecu­menical Council. According to the Holy Fathers of this council, the honor shown towards the holy icons refers back to the ancient Church and confirms the belief in the real incarnation of God the Word. This council ordains that along with the Holy Cross icons be made for the Churches, to be placed on the sacred vessels and the vestments of the priests, in the homes and in the roads; icons of Christ, the Theotokos and all the saints. It further underlines:
"For the more frequently they [the sacred icons] are seen, all the more those who see them are moved to remembrance and desire of those depicted; to them [the icons] they render greetings and a veneration of honor, but not true worship, which in accordance with our faith, is due only unto the divine nature...for the honor rendered to the icon is transfered to the prototype, and he who venerates the icon venerates the person depicted thereon".
Orthodox Christians believe that the Holy Cross is their only pride (Gal. 6,14). It is the instrument through which sin, the source of death, was set at naught (Rom. 5,12. 8,3). The Cross is thus no longer a symbol of death and of shame (Deut. 21,23), but a source of eternal life. Through the Cross the curse is done away with, conciliation "in Christ" is brought about, and "the new man" is created (Eph. 2, 15- 16). These truths are expressed in many of the hymns of the Church:

"You spread out Your hands on the Cross, Ο Merciful One, and You gathered together the Nations that were far from You so that they might glorify Your great goodness".
"By spreading out Your divine hands upon the Cross, Ο Jesus,
You brought unto Yourself the work of Your hands, and You freed all from the hands of the Evil One and subjected them [unto You], for which cause let us faithful hymn Your majesty, for indeed it is glorified".

The Cross of Christ is thus characterized by the Lord Himself as glory, as the judgment of this world, as the casting out of the Devil and as exaltation (Jn 12, 24-33). Our Church characterizes the Cross as "a weapon against the Devil", because he trembles and shudders at the sight of the Cross, not being able to bear its power.

"Lord, You have given us Your Cross as a weapon against the Devil; for he shudders and trembles, not being able to gaze upon its might.
For its resurrects the dead,
and abrogated death;
for which cause we venerate
Your entombment and Your Resurrection".

The Holy Cross of Christ becomes a standard and a measure of either man's triumph or his condemnation, depending upon the position he takes vis-a-vis it. Who­ever equates Christ's Cross with that of the thieves, is equated with the unrepentant thief and is condemned. On the contrary, whoever differentiates the Cross of Christ and considers it to be a royal scepter, and invokes the mercy of Christ, is likened unto the good thief, and the road leading to Paradise is opened up before him. In this way the Holy Cross becomes the measure of the judg­ment of the world, "the scale of justice" as it is called by the hymn of the Church:

"Your Cross stood between two thieves
as a scale of justice.
The one is led down to hell
by the weight of his blasphemy,
the other is lightened from the burden of his sins
unto the knowledge of things divine.
Ο Christ-God, glory to You".

When we speak of the Holy Cross we do not mean only Christ's crucifixion, but also the wood of the Cross. For this, too, is sanctified by its contact with the Body of Christ, and that is why it, too, is venerated: "The wood of Your Cross do we venerate, Ο Lover of man, for on it was nailed the Life of all things", states one of the Church's hymns. The sign of the Cross is also "divine and venerable", says St. Gregory Palamas, for it is "a venerable seal, sanctifying and perfecting all the marvelous and ineffable good things that come from God". It is an image of the crucified Christ and it draws its power and grace from His passion. This is why the sealing with the sign of the Cross is the external sign of all of the Church's Mysteries through which man's salvation is wrought.
The Cross of Christ expresses the ineffable love of God, but at the same time it also expresses man's infinite value in God's sight. A contemporary theologian says that Christ put sin to death without slaying the sinner; He did away with guilt and yet saved the guilty one. This is the great difference between Christ and human justice which crushes guilt by deriding and disgracing the guilty one. However, Christ did not simply conquer sin but also the consequence of sin which is death, and restored man to his pristine purity. Thus He led man to a surpassing of death, to the life of immortality and incorruption. Thus we do not have here a lifting of some type of Augustinian inherited guilt, nor room for any type of "payment" or "ransom" - save only in the patristic sense - and certainly not an Ansel-mian satisfaction of Divine justice. Rather the weight rests on Christ's love, Who achieved the most extreme limits of sacrifice in behalf of those whom He loves. And it is in precisely this that we see man's infinite value.
Making the sign of the Cross is an early Christian Tradition testified to by St. Justin the Martyr (+ 150) and by Tertullian (+ 200). The latter writes: " We Christians in all our travels and in all our movements about, at every departure and upon every arrival, when we put on our clothes and shoes, in the bath and at the table, when we light our lamp, when we sit or sleep, in all the acts of our every-day life in general, we make the sign of the Cross".
" This custom," Tertullian concludes, "has its beginnings in the Church's Tradition, it is strengthened through habit and should be preserved in faith".
Orthodox Christians unite the three fingers of their right hand and place them first on their forehead, then on their stomach and finally bring them to their two shoulders from right to left. All of the Church's theology is depicted in the sign of the Cross. By uniting our three fingers we depict and confess our belief in the One Triune God. From the forehead we bring our fingers to the stomach, and by so doing "typify the Son" Who was pre-eternally born of the Father and came down to earth by His birth from the Virgin Mary. When we place our united fingers on our shoulders we do so to "typify the Holy Spirit", Who is characterized as being the "arm" and the "might" of God. By uniting the remaining two fingers we depict Christ's incarnation and the inseparable union of the two natures, through which human nature was cured and exalted to the height of theosis.
We must not make the sign of the Cross in a mech­anical way, but conscientiously, with inner participation. We should make the sign of the Cross upon our bodies distinctly and not carelessly, but in accordance with the order of the Church: with our three fingers joined together and as if the Cross itself were touching us. It is understood that the sign of the Cross must be accom­panied by analogous faith in that which it depicts and b> the unwavering decision to crucify and do away with our sinful selves and our passions; to put on the new man and ever be orientated towards the Cross and the Resur­rection of Christ.
Orthodox Christians therefore render respect and honorary veneration to the Cross just as they do to the holy icons, in relation always to the personage of Christ. This also holds true for the honor rendered to the saints. This honor is not adoration and worship, but an express­ion of respect and love towards persons and things which God Himself honored by abundantly bestowing upon them His grace. This veneration would be transformed into worship only in such case where one were to render it by identifying in his conscience that which he vener­ated with God. No Orthodox Christian, however, ever identifies the Holy Cross, the sacred icons or the saints with God, nor does he differentiate the honor accorded them from their relationship to the person of our Lord.

Email ThisBlogThis!Share to TwitterShare to FacebookShare to Pinterest
Labels: Icons, The Holy Cross 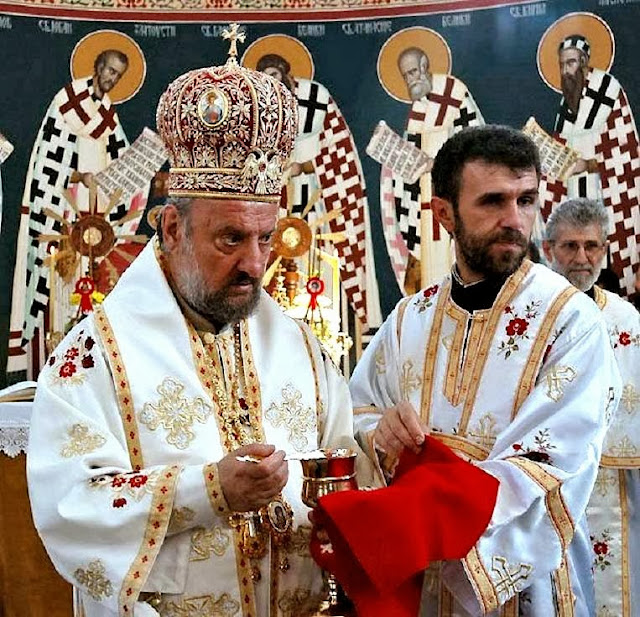