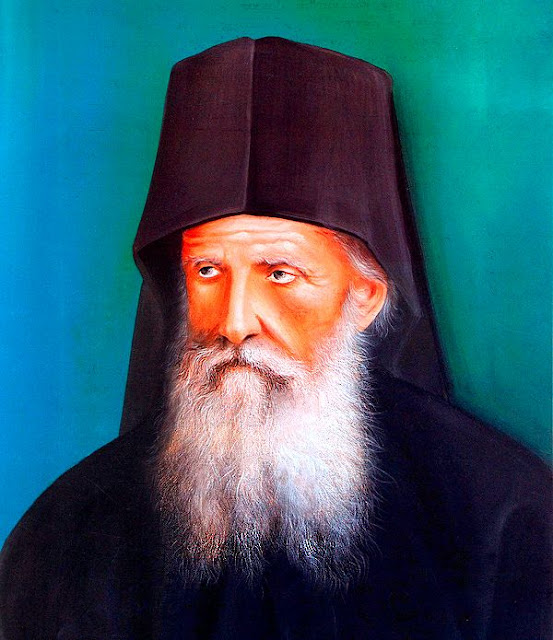 Suspicion in time of peace teaches disturbance and misunderstanding. Suspicion never knows the truth, even if the eyes see the truth and circumstances speak of kindness and love. Suspicion distorts everything and persuades its lover to be convinced of a lie rather than of a truth of what he sees.

Suspicion is a false and grotesque photographer, who in photographing distorts the image of the form before him....

When temptations occur to one who suffers from suspicion, whether from men or from God for his correction, or from natural coincidences, he assumes that such or such a person instigated them, freely censuring the one who is not responsible....

As a vivid depiction of this disastrous madness, I will dispassionately tell you of a reposed monk of Little St. Anne's, Fr. Theophan. He, as we know, being completely conquered by this disease, separated himself from all his brothers and neighbors, declaring that everyone despised him, and that he alone knew what was right, and that the rest were worthy of abhorrence. He suffered this because his suspicions taught such things to him, and he submitted to them and relied on them.

If, my beloved, it happened for the moment that an Ecumenical Council gathered by the Holy Fathers would condemn such as are deceived by their suspicions, they would never yield, maintaining that they are right and the Holy Fathers are wrong.

As much as this passion appears small and unimportant, so, on the other hand, if it is not checked, it can become great and bring disastrous consequences. This passion of suspicion is usually proposed to foolish and vain souls by the crafty serpent, for the reason that they are occupied by the passion of envy and remembrance of wrongs.

Therefore, when any brother yields to the suggestion of this passion, he will first get as a fellow-worker and advocate evil curiosity, and in consequence, whatever his thoughts suggest he will consider as a completed event....

When this passion becomes chronic, the enemy brings to the brother various fantasies suitable to the aim of leading him astray; and thus it happens that he loses his reason, from which may the All-Good God and Lord save us....

In order to prevent such an abominable passion, the brother must from the first beginning shun it as a deadly poison, exposing it to infamy through pure confession and self-reproach.

St. Tikhon of Zadonsk-On The Spiritual Blindness of Sin By St. Tikhon of Zadonsk

Whatever physical darkness is for the eyes, so is sin for the human soul. The spiritual darkness so darkens and blinds the eyes of the soul, that the sinner walks like the blind: he doesn't know where the path leads him; he doesn't see before him the torment of an eternal death in which he might fall; he doesn't distinguish vice from virtue, evil from good, truth from lies, true good fortune from evil fortune, and, thus, seeing he does not see and acts by touching like the blind.

Does he live in good fortune? He becomes violent, as an untrained and unrestrained horse, and does not see that with this good fortune God draws him to Himself as a father of a little child draws an apple. Will misfortune visit him? He grumbles, is indignant and blames, that as if he told a lie; he makes complaints and says a malicious word: "Am I a liar? In what have I sinned? Am I really more sinful than others? Am I worthy of this? Does my work deserve this?" He justifies himself, being full of every kind of untruth; he cleanses himself, being all besmirched; he considers himself unworthy of temporal punishment, but worthy of the eternal; he praises his merits, which stand for nothing.

All of creation, the heaven, the sun, the moon, the stars, the earth and its fulfillment, as if by mouth "tells of the glory of God" (Psalm 16:2); but the blind sinner does not feel the majesty of His glory and does not tremble. God, both through creation and by His word, reveals Himself for everyone; but the sinner, like a deaf person, does not hear His word and does not recognize the Lord. He hears the name of God, but he does not recognize God: he hears the voice of the Lord only with carnal instead of spiritual ears, and therefore, "hearing he does not hear and seeing he does not see".

And not only in relation to God, but also in relation to his neighbor, i.e. to any human, the blind man is a carnal and unenlightened man. We see that a person does evil to his neighbor, which he himself does not want; and does not do good to him, which he himself wants. We see that he is indignant and angry at the one who offends him; he abuses, abases, blames, discredits, lies about him, steals, kidnaps, takes away that which is his, and does other offenses; but he himself does such evil, or repays evil with evil, and is not ashamed and does not sense this. On the other hand, he wants his neighbor to be merciful to him and not leave him in need, for example: to quench his thirst and to give him drink when he thirsts, clothe the naked, welcome the stranger into his home and to comfort the sick and visit those in prison and do other works of mercy for him. All of this he wants, this truth is indisputable, but he himself does not want to do the same for a neighbor. We see that this evil is self-love, an untruth and blindness in Christians, who either silently pass by his neighbors living in misery as if not seeing them, or is ashamed to ask: "what can I do for him?" Many have plentiful food and a magnificent table for themselves, but do not care about a hungry neighbor; others wear all kinds of expensive clothes, and do not care about their naked neighbor; others build rich, large and tall houses and decorate the rest of the building, but for their neighbor who does not have a place to lay his head and to rest they do not care; they have silver, gold and other riches, comfortable for soul and life, that is kept whole and is saved, but there is no care for their neighbor who is burdened with debt and it is torment or prison for him for his shortfalls or sitting debts and suffering. We see this self-love and untruth in Christians: for not only they do evil, but also they don't do good for their neighbors, there is the untruth.

But, what it is even worse, we see that many Christians are not ashamed and are not afraid to steal, to kidnap and to be cunning, to flatter, to lie, to deceive, to slander, to scandalize, to denounce, to abuse, to commit adultery and make other offenses against their neighbor that they themselves would not want. All this comes from blindness.
Posted by Tom Manakis at 1/12/2013 08:09:00 am No comments: