Saint Nektarios On The Inviolability of Free Will 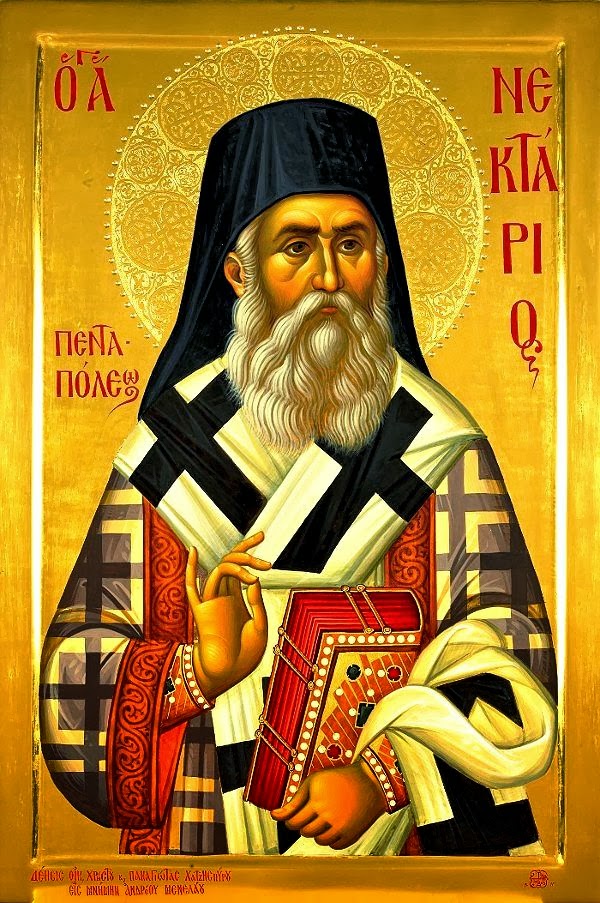 “If anyone would come after me, let them deny themselves, take up their cross and follow me”  (Matth. 16, 24).

“Human free will is sacrosanct”. This saying demonstrates the profundity of our moral freedom. The Saviour invites people to follow Him and then leaves us free to decide this most important question for ourselves: to follow Him or turn against the way of God. He came for our salvation but does not encroach on our free will. He invites us to take an active part in our salvation, but does not violate our free will in the slightest. If people were not free and self-determining beings, we would never have deserved such great respect, we’d never have been accorded such great honour, that is to work with Christ the Saviour for our own salvation; nor, of course, would it have been left to our personal inclination, but rather we’d have been led to salvation as passive and inert creatures and would have simply accepted the effect of divine grace, which would have worked exclusively for our redemption. Truly, this is how respected and inviolate God desires our moral freedom to be; how imperious He wants our free will to be.

A study of the history of the redemption of humankind reveals the Son of God, Who became a person in order to save all of us, treading the path to His voluntary passion, bearing the sin of the world, healing our wounds, fulfilling the great mystery of divine dispensation, reconciling us with God and yet in no way infringing our free will. There you are! The gate of Paradise, which had been shut, was opened; the fiery sword which guarded the entrance was removed and the voice of the Lord invited excluded humanity to enter thereby into a place of peace and quiet. But we were left free to enter or not, as we choose.

This freedom, that is to act by choice and to follow His laws, not influenced even by God Himself, demonstrates  the absolute nature  of our free will, which derives from our moral freedom, our great value, and the high position we occupy in the creation. What great honour is rendered to us by the fact that our free will is inviolate. At the same time, with what clarity are we taught our responsibilities: that we should respect our free will; have fervent zeal; and not allow, under any circumstances, our free will to be enslaved and our moral freedom to become dependent on humiliating passions and desires.

Our moral freedom obliges us to make provision for our salvation, because otherwise we’ll be lost. The formal recognition of our moral freedom by the Saviour Himself teaches us that our salvation is not going to be achieved solely by the absolute action of God’s grace, but also by our own consent and simultaneous action. Concerning this necessity, let’s see what the wise Fathers of the Church have to say. Chrysostom  says: Even though grace is grace, it saves only those who desire to be” (Discourse 18 on Romans). Gregory the Theologian stresses that: “Our consent is necessary; but we’ll be saved by God” (Discourse 31). Clement the Alexandrian adds: “God inspires the souls that desire; but if their readiness abandons them, then the very grace which has been given them by God will be denied them”. And Justin concludes: “God did, indeed, make people without their consent, but is unable to save them against their will”. So we are expressly and clearly taught that there are two factors in our salvation: a) the free desire of the human will and b) the grace of God.

The prime agent in the work of our salvation is indeed the grace of God, because Christ the Saviour came as Light to those who were in the dark and shed the light of His Grace on those “dwelling in darkness and the shadow of death”. He sought the lost sheep, called back those who had strayed, spoke secretly to people’s hearts and showed us the way to salvation. It’s the grace of God which perfects and saves, yet our own will should not be accounted of any less importance. We should regard it as the outstanding gem in the crown of our salvation, since it’s the main lever that shifts our outlook that has been rendered inert by sin.

This is what urges our footsteps to follow the Saviour, this is what strengthens our hearts to show self-denial, this is what bears the cross on the shoulder. Because, although grace invites us, dispels the gloom and illumines the dark places, it’s possible  nevertheless, due to the carelessness and slothfulness, the contamination and spiritual idleness of the carnal view of life, for our free will to feign deafness, to close its eyes, to remain in darkness and to proceed in exactly the opposite direction: the one to perdition. In other words, our free will can act in total contradiction to what it actually wants. So it’s necessary for us truly to want our salvation, to seek it.

We have to want to hear, in order to hearken to the voice of  Him Who is calling us. We need to want to see in order to open our eyes to the brilliant, abundant light. We have to want to move, to follow the Saviour, to refuse to be the people we once were, with our passions and desires, in order to take the cross upon our shoulders. We must follow the “strait and circumscribed road” so that we may pass through the narrow gate of Paradise

Our own will has to come first, because this is required by the terms with which the Saviour calls those who are of a mind to follow Him. Without this disposition, it would be impossible to fulfill the terms offered, and thus salvation itself would be beyond us. On  the one hand, grace is granted, but our will and concurrence are necessary if we are to receive it. Even more so, what is required is self-denial, self-sacrifice, a stable outlook which will not allow for any deviation from the path of constantly following the voice of the Saviour, Who calls and is the voice of grace and of truth. If the grace of God which comes to us saved people by itself, the call would be entirely superfluous, as would be the terms and conditions. But though the grace of God is infinite, it doesn’t save by itself, because it doesn’t want to violate our free will.

Were it not that our consent is a vital factor in our salvation, God, in His infinite love for humankind, would, of course, save everyone, but without their consent. And yet, with very precise  terms, He did indeed call us who are enslaved to our sentiments and who tend towards sin. He offered salvation, but demanded that we conform, because this was required by a great and important provision: the stipulation that we be reborn and renewed in Jesus Christ our Saviour. Because in our former state, we could not enter the Kingdom of God, since we’d been corrupted by sin. So we had to cast off this person, with its desires and passions and put on a new person, who had been reborn, in the awareness that they were made by God in His “image”.

But in order to cast off the old person, we first have to want to do so. So our cooperation in the task of our perfection is exceptionally important. Our Saviour has told us that in His Father’s house, “there are many rooms”. The people who dwell therein are those who have lived their lives on earth in an appropriate manner. Our life-style here, therefore, defines our position in Paradise. Saint Gregory Nazianzinos has this to say on the matter: “Just as there are various, separate ways of living, so there are “many  rooms with God”, which are allocated depending on each person’s worth. One of us might have one virtue, another have them all. Given this, let each of us, from now on, cease from wandering off wherever the mood takes us and instead follow Him Who guides us well and directs us along the narrow path, in order to bring us to the broad highway of blessedness”.

So we have to work for our salvation, otherwise we run the ultimate risk of perdition, since there’s nothing in common between light and darkness, any more than there is between good and evil. Sin, which has corrupted us, is darkness and the great evil, because it conflicts with the will of God. Since we have the privilege of moral freedom, any misconduct on our part is counted as a sin that sets us apart from God. The greater the good of moral freedom, the greater also are the responsibilities this entails. People who are morally free should become holy. This is why, in the Old and New Testaments God gives commands saying: “Become holy as I am holy” (Levit. 20, 7, 26 and I Peter, 1, 16).

Because how can people who are loathsome, people who are worthy of aversion have any sort of communion with God? And the Saviour also gives us a similar commandment when He says: “You, too, should be perfect, as our Father in heaven is perfect” (Matth. 5, 28), because His children should be like the Father Who has called them. God, then, wants us to be holy and perfect, because only those who are holy and perfect are really the children of our Father in heaven and they alone have the right to invoke His gifts, taking courage precisely from the love of a child for its Father.

They alone will inherit the kingdom of heaven. Saint Paint wrote about all of this in his epistle to the Corinthians: “Don’t you know that the unrighteous won’t inherit the kingdom of God? Don’t be deceived: no fornicators, idolaters, adulterers, effeminates, sodomites, thieves, drunkards, nor those given to cursing, avarice and peculation will inherit the kingdom of God” (I Cor. 6, 10).  This is why the Saviour calls upon us to deny ourselves, to take up the cross on our shoulders and follow Him. “If anyone would come after me, let them deny themselves, take up their cross and follow me”  (Matth. 16, 24). He recognizes our moral freedom and our free will, and leaves our salvation in their care. So that people who seek their salvation will have to work to acquire it, otherwise they’ll be deprived of it. Otherwise, through their carelessness and lack of concern, they’ll be preparing themselves for the loss of eternal life and will inherit eternal hell, from which I pray that God will spare us all. Amen.