“Thy birth, O Theotokos, has proclaimed joy to the whole world…” The Birth of the All-Holy Theotokos 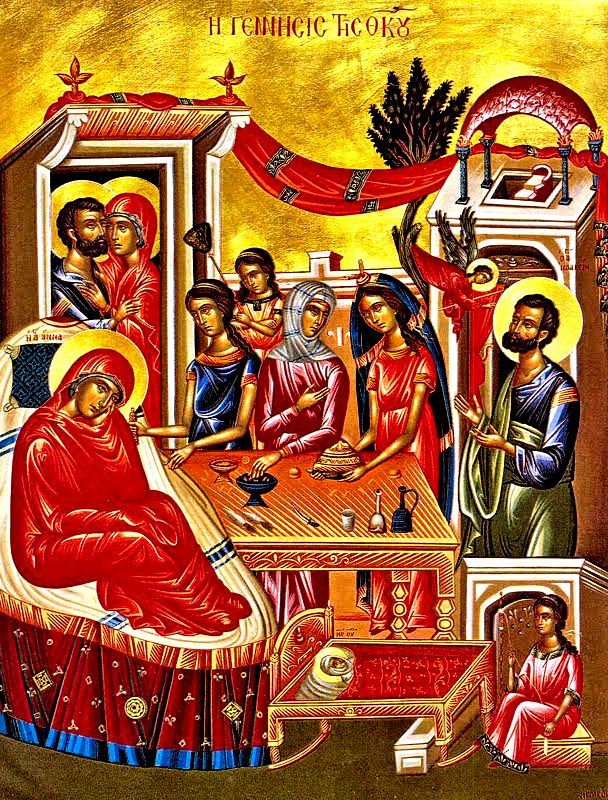 A homily of the abbot of the Great and Holy Monastery of Vatopedi,Mount Athos, Archimandrite Ephraim, in the refectory of the monastery at the Feast of the Mother of God on September 8th.

Today is a cause for spiritual joy and rejoicing, my dear brothers and fathers, for today we celebrate the birth of the ever-virgin and God-bearing Maria, that most fragrant flower who sprung forth “from the root of Jesse.” We celebrate the “birthday of universal rejoicing,” which constitutes the “entrance of all of the feasts and the prelude to the mystery of Christ,” according to St. Andrew of Crete. Birth, which became the agent of the rebirth, of reconstruction, and the renewal of all things. Today she is born who will give birth, in time and in an incomprehensible and strange fashion, to the timeless and pre-eternal God the Word, the Creator and Savior of the world.
In the Old Testament there are many passages that foreshadow, prefigure, and prophesy Her. She is the completion, the fulfillment of the Old Testament pedagogical preparation of humanity for its acceptance of the incarnated Savior God. Our Panagia was prefigured by the burning bush in Moses’s vision, by the God-written plaques and the tabernacle of the Law, by the heavenly manna, by the golden seal, by the lamp and the altar, the blossoming rod of Aaron, by Jacob’s ladder, the wool of Gideon, Daniel’s uncut mountain, the fiery furnace which with its fire cooled the Three Children, as well as by the Holy of Holies in the tent of witness. The Theotokos is the borderline between the Old and the New Testament. For the Old Testament, she was the message of the prophets, the hope of the righteous; while in the New Testament she becomes the sweetness of the angels, the glory of the apostles, the courage of the martyrs, the delight of the venerable, the boast of humanity, which is why she is glorified by “every generation.”