The snakes that venerate icons!! 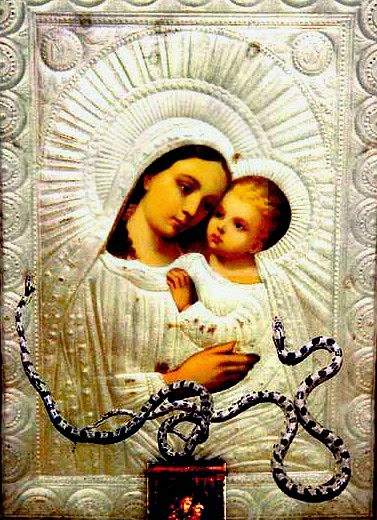 Icon of Panagia Fidousa (Virgin of the Snakes)

In a tiny Greek village in the south of Kefallonia, a miracle occurs every year after the feast of the Transfiguration (Aug 6). Around the bell-tower of the chapel at Markopoulo, small venomous snakes appear. These snakes crawl around the church, and upon the icons of the Mother of God in an act of apparent veneration. The snakes remain in the confines of the chapel, docile throughout, until the feast of the Dormition (Aug 15), when they disperse and become almost impossible to find on the island. This is a strange miracle, especially given the association of the serpent with Satan, so what is the significance?

The chapel at Markopoulo is built on the ruins of a convent. In the early 18th-century, the nuns there were attacked by pirates. After praying to the Mother of God for help, the church was filled with snakes; when the pirates entered the convent they were terrified by the sight and fled. Every year since then, snakes have appeared during the Dormition fast around the church, venerating the icons there, leaving after the feast itself. In recent years, the snakes have failed to appear twice: in 1940, the year Greece was brought into the Second World War, and 1953, the year of a devastating earthquake on Kefallonia. Because of this, it is believed to be a portent of coming disaster if the snakes do not appear, or appear in small numbers. The first, straight-forward, meaning of the snakes appearance in Kefallonia is simply to remind us of one of the many times the Mother of God has helped those who prayed to her.

And I will put enmity Between you and the woman (Gen 3:15)

Yet there is much symbolic history associated with snakes in Christianity, much of it relating to the serpent being a representation of the devil (Gen 3; Ps 91:13; Rev 12:9; 20:2) and evil in general (Num 21:4-9; Matt 3:7; 23:33). This symbolism is so deeply implanted in our historically Christian culture that it may seem as though the snake by its very nature is a wily, slippery, evil creature. Yet the holy fathers remind us that our current instinctive revulsion to vipers is something that came after the Fall:

Do not regard the present serpent; do not regard how we flee it and feel revulsion towards it. It was not such in the beginning. The serpent was the friend of man and the closest of those who served him. and who made it an enemy? The sentence of God: “Cursed are you above all the cattle, and above all wild animals… I will put enmity between you and the woman” (Gen 3:14-15). It was this enmity that destroyed the friendship. I mean not a rational friendship, but one of which an irrational creature is capable. Similar to the way that now the dog manifests friendship… just so did the serpent serve man. As a creature who enjoyed great closeness to man, the serpent seemed to the devil to be a convenient tool (for deception)… Thus, the devil spoke through the serpent, deceiving Adam. -St John Chrysostom, On the Creation of the World; 6.2

The serpent was accustomed to man, and approached him more readily than it did other living creatures, and held intercourse with him in delightful motions. and hence it was through it that the devil, the prince of evil, made his most wicked suggestion to our first parents. -On the Orthodox Faith; 2.10

The serpent – in all its varieties and species – were thus cursed because it was used as an instrument of Satan:

But perhaps some will say: If the counsel was given by the devil, using the serpent as an instrument, why is this animal subjected to such a punishment? This was also a work of God’s unutterable love for mankind. As a loving father, in punishing the murderer of his son, breaks also the knife and sword by which he performed the murder, and breaks them into small pieces – in similar fashion the All-good God, when this animal, like a kind of sword, served as an instrument of the devil’s malice, subjects it to a constant punishment, so that from this physical manifestation we might conclude the dishonour in which it finds itself. -St John Chrysostom, Homilies on Genesis; 17.6

“In my name…they shall take up serpents”

The world suffered from the condemnation given to Adam, Eve, and the serpent, as it still does today. However, with the advent of Jesus Christ in the world, His death, resurrection, and ascension, the curse is lifted, and the means of our restoration is available. And through our restoration to our pre-fallen state, the fallen state of the world is also reversed. This is why St Paul was unharmed by the snake that bit him (Acts 28:3-5), why Jesus said we would be able to pick up serpents with our hands (Mk 16:17-18), and why numerous other Saints have lived in peace with wild beasts. These examples show to us that with faith and through God, the harmony of Paradise is restored even in this life.
The miracle bestowed upon Kefallonia every year is just another example, and a particularly fitting one. As one Sunday hymn proclaims:

You are exceedingly blessed, O Virgin Mother of God, for Hades has been taken captive by him who was incarnate of you. Adam was recalled, the curse was abolished, Eve was delivered, death was put to death and we were given life. Therefore, praising you we cry aloud: Blessed are you Christ our God, who thus was well pleased, glory to you.

Jesus redeems mankind and the entire created world, so what is true of Adam and Eve is true also of the snake. And so this animal, through which the devil tempted Eve, comes to venerate icons of the “second Eve”, Mary: the woman who brought forth the seed, Christ, through Whom “the curse was abolished.”

Links: The Holy Snakes of the Virgin Mary in Kefallonia: Part 1 and Part 2 – A lot of detail about the miracle and the location, including videos.
The European Cat Snake – Wiki article about the specific species of snake that appears in Kefallonia.
Contemporary pictures of the miracle – written from a distinctly non-Orthodox perspective.
Posted by Tom Manakis at 8/11/2014 10:03:00 pm No comments: Links to this post 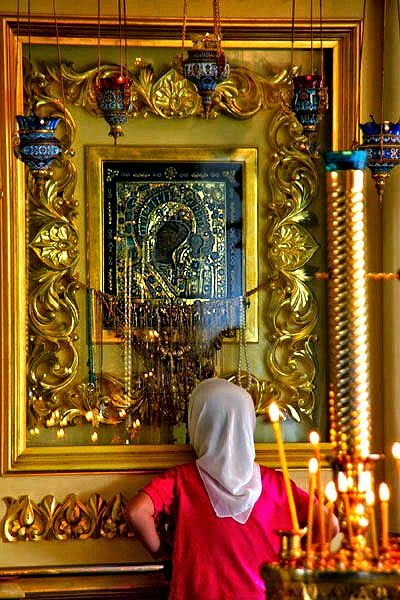