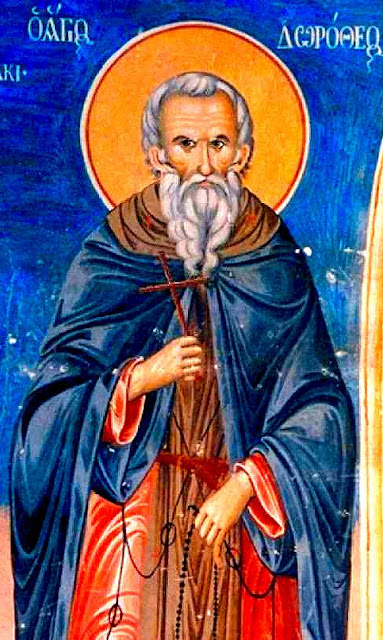 Homily on the Conscience by St Dorotheos of Gaza

WHEN GOD CREATED man, he breathed into him something divine, as it were a hot and bright spark added to reason, which lit up the mind and showed him the difference between right and wrong. This is called the conscience, which is the law of his nature. This is compared to the well which Jacob dug, as the Fathers say, and which the Philistines filled up. [cf. Genesis 26:15] That is, to this law of conscience adhered the patriarchs and all the holy men of old before the written law, and they were pleasing to God. But when this law was buried and trodden underfoot by men through the onset of sin, we needed a written law, we needed the holy prophets, we needed the instruction of our Master, Jesus Christ, to reveal it and raise it up and bring to life through the observance of the Commandments that buried spark.

It is in our power either to bury it again or, if we obey it, to allow it to shine and illuminate us. When our conscience says to us, ‘do this!’ and we despise it and it speaks again and we do not do it but continue to despise it, at last we bury it and it is no longer able to speak clearly to us from the depths where we have laid it. But like a lamp shining on a damaged mirror, it reflects things dimly and darkly, just as you cannot see the reflection of your face in muddy water. We are found unable to perceive what our conscience says to us so that we think we have hardly any conscience. No one is without a conscience, since it is something divinely implanted in us, as we have already said, and it can never be destroyed. It always patiently reminds us of our duties, but sometimes we do not perceive that we are despising it and treading it underfoot. This is why the prophet bewails Ephraim and says, ‘Ephraim prevails against his adversary and treads down judgment.’ [Hosea 10:11] The adversary here is ‘conscience.’ Here the Gospel says, ‘Come to an agreement with your adversary while you are on the way with him, lest he deliver you to the judge and the judge to the warders and they put you in chains. Amen, I say to you, you shall not leave the place until you have paid the last farthing.’ [Mt. 5:25-26] Why does he call conscience the adversary? It is called the adversary because it always opposes our evil desires and tells what we ought to do and we do not, or what we ought not to do and we do; and it accuses us, and so conscience is called our adversary, and Our Lord admonishes, ‘Come to an agreement with your adversary while you are on the way;’ for the ‘way’ as St Basil says, is this world. [Hom. in Ps. I; PG 29:200-21]

Let us be zealous, brothers, to guard our conscience for as long as we are in this world and not to neglect its promptings in anything. And let us not tread it under foot even in the least thing, for you can see that from the smallest things, which of their nature are worth little, we come to despise the great things. When we begin to say, ‘What is it if I say just these few words? What does it matter if I eat this morsel? What difference if I poke my nose in here or there? From this way of saying, ‘What does this or that matter?’ a man takes evil and bitter nourishment and begins presently to despise greater and more serious things and even to tread down his own conscience and so, at last destroying it, bit by bit, he falls into danger and finally becomes completely impervious to the light of conscience.

Therefore, brothers, see to it that we do not neglect little things; see to it that we do not despise them as of no account. There are no ‘little things’ - for when it is a question of bad habits, it is a question of a malignant ulcer. Let us live circumspectly, let us give heed to trivial matters when they are trivial, lest they become grave. Doing what is right and what is wrong: both begin from small things and advance to what is great, either good or evil. Therefore Our Lord warns us to take account of our conscience as one giving evidence of his own experience and saying ‘Be careful, simpleton, see what you are doing, come to an agreement with your adversary while yet on the road’ and he shows the danger to be feared: ‘Lest he deliver you to the judge, and the judge to the executioner and he throw you into prison.’ And what else? ‘Amen, I tell you, he shall not go from there until he has paid the last farthing.’ [Mt. 5:26] Conscience then warns us, as I said, about what is good or what is bad and shows us what to do and what not to do, and in the world to come it will accuse us. Therefore it says, ‘Lest he deliver you to the judge...’ etc.

In attending to our conscience, we need to consider many different factors. A man needs to satisfy his conscience towards God, towards his neighbor, and towards material things. As regards God: he must not despise God’s precepts, even those concerning things which are not seen by men or those things for which one is not accountable to men. A man should obey his conscience in relation to God; for example, did he neglect his prayer? If an evil thought came into his heart, was he vigilant and did he keep control of himself or did he entertain it? He sees his neighbor saying something or doing something; does he suspect it’s evil and condemn him? To put it simply, all the hidden things that happen inside us, things which no one sees except God and our conscience, we need to take account of. This is what I mean by our conscience towards God.

As regards keeping a good conscience in respect of material things: not to use things badly, not to render things useless, not to leave things about, and when we find things left about not to leave them even if they are of small value, but to pick them up and put them in their proper place. Not to be slovenly about our clothes or wear them out too quickly: for example, when one can wear a shirt a week or two, to want to wash it every day and so by constant washing wear it out too quickly and always be asking for new. These things are against the conscience. Similarly about the bed, often when one can make do with a small mattress, one asks for a large one; and when one has a blanket, one wants to exchange it for a new one or a better one for the sake of prestige or from mere thoughtlessness. Or where a rush mat is adequate one asks for a carpet and is quick to protest unless one gets it; or one approaches one of the brethren and says, ‘Why has so-and-so got such a thing and I haven’t?’ Such a man is not on the right road. Or a man hangs his tunic or blanket in the sun and through negligence leaves it there to spoil-this is all against the conscience. It is the same about food: a man is perfectly able to satisfy the needs of his body with bread, vegetables, and few olives, but he gives up doing so and seeks something more tasty and more expensive-all this is against the conscience.

The Fathers tell us that a monk ought not to give his conscience occasion to reproach him about anything at all. [Apo Agathon 2; PG 65:109] It is necessary, therefore, brothers, to keep watch over ourselves always and to keep ourselves away from all these things lest we fall into danger. For Our Lord also will bring an indictment against us, as we have said above. May God grant we listen and be attentive to these things, lest the sayings of our Fathers turn out to be for us words of condemnation.