Elder Ephraim Of Arizona(Philotheou Mt.Athos)-On The Path to Unceasing Prayer 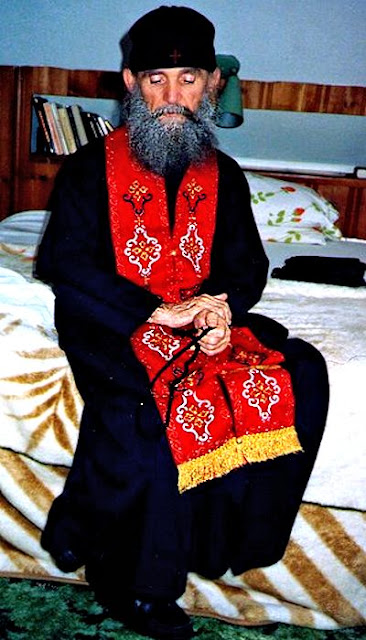 The Path to Unceasing Prayer.


The heart of man is the center of movements above nature, in accordance with nature, and contrary to nature. Everything begins from the heart. If the heart of man is purified, he sees God. But how can we see God? Does God perhaps have human form? Does He have the shape of a human? No, of course not! God is invisible; God is Spirit. He is able, however, to reign in man’s heart when it becomes a vessel fit to receive Him. For the heart of man to become a vessel fit to receive God, it must be cleansed of unclean thoughts. But in order for the heart to be cleansed, some kind of cleaner must enter into it.
This cleaner is prayer. Wherever the king goes, his enemies are driven out. And when Christ—or rather, His holy Name—enters into the heart, the phalanxes of demons are put to flight. When Christ is enthroned well within, then everything becomes submissive. It is like when a good king conquers a country and is enthroned in the capital; then he subjugates all the rebels with his army. That is, he pursues the enemies and pacifies the country from internal troubles, and then there is peace. Meanwhile, the king sits on his throne and sees that everything has been subdued. Then he rejoices and delights in seeing that the labor and fight have ended and that they have brought obedience, peace, and all the desired results. Thus it is also with the kingdom of our heart. It has enemies within it; it has rebels; it has thoughts; it has passions and weaknesses; it has storms and disturbances—all these are within man’s heart. For the kingdom of the heart to be pacified and subjugated, Christ, the King, must come with His regiments to take control of it and drive out the enemy, the devil. He must subjugate every agitation from the passions and weaknesses, and reign as an omnipotent emperor.

St. Gregory Palamas says that when the prayer is said with every breath, in time a subtle fragrance comes out of the nostrils. Indeed, this is the case. Through prayer a fragrant air will be produced which is nothing but a fruit of prayer. When we were beginners and were saying the prayer like that, there was so much fragrance that everything smelled sweet—our beards, and even out of our chests came so much fragrance. The air we inhaled and exhaled was all fragrant, and I thought to myself, “What is this prayer?” It is the name of Christ! And what doesn’t the name of Christ contain within it? By the name of Christ, the Holy Gifts are sanctified; by the name of Christ, baptism is done, the Holy Spirit comes, the saints raised the dead. By the name of Christ, everything is done. One of the Watchful Fathers said that when the soul departs from a person who has acquired the prayer, it is not possible for the demons to remain near him, since his soul departs with this prayer. The name of Christ is his weapon. His soul is armored with the prayer. How can the demons approach him? That is how great its benefit is. This is why the angel who taught St. Pachomios said, “Many learned men abandoned their studies and their scholarly works, occupied themselves with this prayer, and attained sanctity”. Likewise, the hermitess Photini (The hermitess Photini lived in complete seclusion near the Jordan River in the beginning of the twentieth century. Her life has been published in Greek by Archimandrite Joachim Spetsieris. God willing, we shall publish it in English in the near future. ) wrote that the services are like one’s daily wages: if you worked, you are paid and can buy food; if you didn’t work, you don’t get anything. This is how the conventional prayers of the Church are. But unceasing, noetic prayer gives you not only your daily wages, but it produces great spiritual wealth, and you can put it in the bank and get rich. With this prayer, a person sits and listens to his heart working. This work is very productive! Just as a machine works on its own once we get it started, the same thing happens when one progresses in the science of prayer. As in the old days, machines were manually operated and required a lot of labor, but once it is made automatic and electric, it is more productive and requires less labor. The same thing happens with prayer. In the beginning, it requires labor to regulate the prayer with one’s breathing. But afterwards the work becomes automatic, and the nous monitors it as a machinist monitors a motor. Prayer is aided by keeping silent, by not having boldness or pride. Pride is a very great obstacle to prayer. When praying, as soon as the nous has proud thoughts, criticize yourselves constantly so that pride does not raise its ugly head. It is beneficial even to hit yourselves with a cane and call yourselves names so that pride does not raise its head at all. A person should not be thinking anything at times of prayer but should only try to pray with fear. The more he adorns his prayer with love and humility and the fear of God, the more progress he will have. If you try this out in practice, you will see for yourselves. Just as when we go into a candy store we find chocolates, pastries, and various sweets, so also in the spiritual candy store one finds many different sweets, and we will take whatever the baker gives us. We will do our duty to regulate our prayer and humble ourselves, and then whatever God sends is His business. We will do all the formalities, but it is God Who will give the substance to prayer. But the more humbly we pray, the more benefit we will have. Most importantly, though, the nous must be attentive to the words of the prayer, without thinking anything else at all. This is the heart of the whole matter. It is impossible for a person praying in this manner to be deluded. So this is how we will pray from now on. This method will be our rule of prayer, because it will greatly assist us to see our passions, our faults. All this effort will help us collect our nous. However, light and moving around create commotion in the nous. But when a person remains in one place, whether standing, sitting, or kneeling, his nous has no commotion. This method has a lot of substance in it.
If you work at it, you will see for yourselves, and you will find great things. There was a certain pilgrim who had been initiated in noetic prayer. Because he had much meditation, self-denial, and freedom from cares—since he was not bound with a family, work, or any other things—he said the prayer continuously and felt very great love for Christ. That is, he really did have divine eros in his soul. He had a great desire to go to the all-holy tomb of Christ; he thought that there he would in some way have his fill of love for his dearly beloved Christ. So he went down to Jerusalem to the tomb of Christ and went inside to venerate it. Certainly he felt intense feelings of passionate spiritual eros. He reflected that here the One Whom he worshipped—Jesus Christ—had been buried and that here was His empty tomb, and so forth. As he venerated the holy tomb, right there upon the tomb, he gave up his soul! When the others saw this, they said, “Let’s see what this man had hidden in his heart!” They did an autopsy, cut open his heart, and were amazed: there within his heart were written the words, “Jesus, my sweet love”. (A similar phenomenon occurred with the heart of St. Ignatios the God-bearer. ).

Do you see how rich the prayer had made this man? How much it had enriched him with divine love? Just think where he found himself after his death! Certainly angels receive his soul and took it before the throne of Christ crowned in splendor. Only through noetic prayer does man reach dispassion. Neither by much reading nor with much chanting or by any other way is it possible to attain dispassion. He who prays in this way will learn on his own to hate idle talk and boldness, and will try to find time alone in order not to lose the spiritual state he finds through prayer. I pray that God will give you the feeling of this prayer. And when grace comes, then you will discover these things in practice and understand what I am telling you now.

Taken From The Book "Counsels From The Holy Mountain" by Elder Ephraim Of Arizona(Philotheou Mt.Athos)