ST. MARK THE ASCETIC - To Those Who Think To Be Justified by Deeds 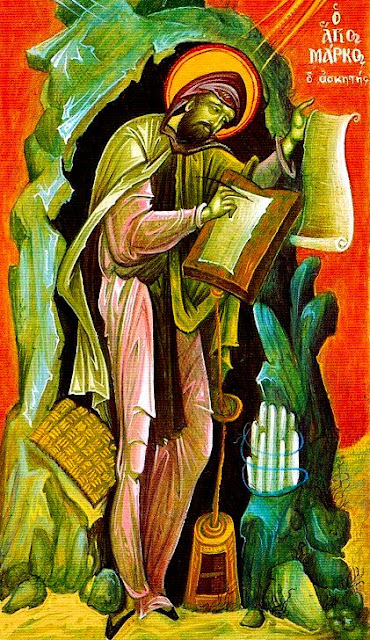 Wishing to show that, although every commandment is obligatory, none the less it is by His blood that sonship is granted to men, the Lord says: “When you have done all those things which are commanded you, say, We are unprofitable servants: we have done that which was our duty to do” (Luke 17:10).  Thus the kingdom of heaven is not a reward for deeds, but a gift of the Lord prepared for faithful servants.
-- “Christ died for our sins according to the scriptures” (I Corinthians 15:3), and He grants freedom to those who serve Him well.  For He says: “Well done, good and faithful servant; thou hast been faithful over a few things, I will make thee ruler over many things: enter thou into the joy of the Lord” (Matthew 25:23).
-- He is not yet a faithful servant who bases himself on bare knowledge alone; a faithful servant is he who professes his faith by obedience to Christ, Who gave the commandments.
-- He who reveres the Lord does what is commanded, and if he commits some sin or disobeys Him, endures whatever he has to suffer for this as being his desert.
-- If you love knowledge, love also work, for bare knowledge puffs a man up.
-- Knowledge without corresponding practice is still insecure, even if it is true.  All is made firm by practice.
-- He who wants to do something and cannot is, in the eyes of God who sees our hearts, as though he has done it.  This should be understood as being so in relation to good and evil alike.
-- Some think they believe rightly, while not practicing the commandments; others, while practicing them, expect the kingdom as a just reward.  Both sin against truth.
-- We who have been granted the bath of eternal life do good works not for the sake of reward, but to preserve the purity which was given us.
-- Every good deed we perform by our own natural powers, although it removes us further from the (evil deed) opposed to it, cannot make us holy without grace.
-- The abstinent withdraws from gluttony, the uncovetous from covetousness, the silent from wordiness, the pure from attachment to sensory pleasures, the chaste from fornication, he who is content with what he has from love of money, the meek from agitation (anger), the humble from vanity, the obedient from objection, he who is honest with himself from hypocrisy; equally, he who prays withdraws from despair, the willing pauper from acquisitiveness, he who professes his faith from denying it, the martyr from idolatry - so you see that each virtue, performed even unto death, is nothing but withdrawal from sin; and withdrawal from sin is a natural action, not an action which could be rewarded by the kingdom.
-- When the mind forgets the purpose of piety, then visible works of virtue become useless.
-- He who does good and seeks a reward works not for God but for his own desire.
-- Some say that we can do nothing good until we actively receive the grace of the Holy Spirit.  This is not true.
-- To him who has been baptized into Christ grace has been mysteriously given already.  But it acts in proportion to his fulfillment of commandments.  Although this grace never ceases to help us in secret, it lies in our power to do or not to do good according to our own will.
-- In the first place, it fittingly arouses conscience, through which even evil-doers have been accepted by God when they repented.
-- Again, it may be concealed in the advice of a brother.  Sometimes it follows thought during reading and teaches its truth to the mind by means of a natural deduction (from that thought).  Thus, if we do not bury this talent bestowed upon us on these and similar occasions, we shall in truth enter into the joy of the Lord.
-- If you will keep in mind that, according to the Scriptures, the Lord’s “judgments are in all the earth” (Psalms 104:7), then every event will teach you knowledge of God.
-- If, according to the scriptures, the cause of all that is involuntary lies in what is voluntary, no one is a man’s greater enemy than himself.
-- If you wish to be saved and to come to the knowledge of truth, always urge yourself to rise above sensory things and to cling with hope to God alone.  Thus compelling yourself to turn inwards, you will meet principalities and powers, which wage war against you by suggestions in thoughts.  If you overcome them by prayer and remain in good hope, you will receive Divine grace, which will free you from the wrath to come.

-Saint Isaac The Syrian-ON THE THREE MODES OF KNOWLEDGE 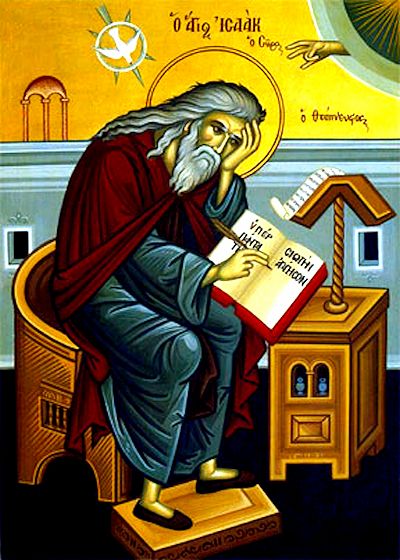 -- The first degree of knowledge renders the soul cold towards efforts to walk according to God. The second warms the soul, hastening its progress towards that which is on the level of faith. The third is rest from activity, enjoying the mysteries of the future life, in a single striving of mind. But since our being is as yet unable entirely to transcend its state of lifelessness and the burden of the flesh, so, while a man lives in the body, he remains in a constant state of changing from one to another. Now, like a miserable beggar, his soul begins its service in the second, the middle degree of virtue; now, like those who have received the spirit of sonship in the mystery of liberation, he rejoices in the quality of spiritual grace which corresponds to its Giver; then again he returns to his humble works performed with the help of the body. For there is no perfect freedom in this imperfect life.

-- In the second degree, the work of knowledge consists in long- drawn exercise and labor. Work in the third degree is the doing of faith, performed not through actions, but through spiritual representations in the mind, in an activity which is purely of the soul, since it transcends the senses. By faith we mean not faith in relation to the distinctions of the Divine Hypostases we worship, or the miracle of dispensation through Incarnation in man's nature, although this faith is also very lofty; we mean that faith, which is kindled in the soul from the light of grace and which fortifies the heart by testimony of the mind, giving it the certainty of hope which is free from all doubt. This faith manifests itself not through increased hearing fo the ears, but through spiritual eyes, which see the mysteries hidden in the soul, that invisible Divine treasure, which is hidden from the sight of sons of the flesh and is revealed by the Spirit to those who receive their food from Christ's table and learn His laws. As the Lord said: if ye keep my commandments, I will send you a Comforter, "even the Spirit of truth; whom the world cannot receive . . . he shall teach you all things" (John 14:17, 26).