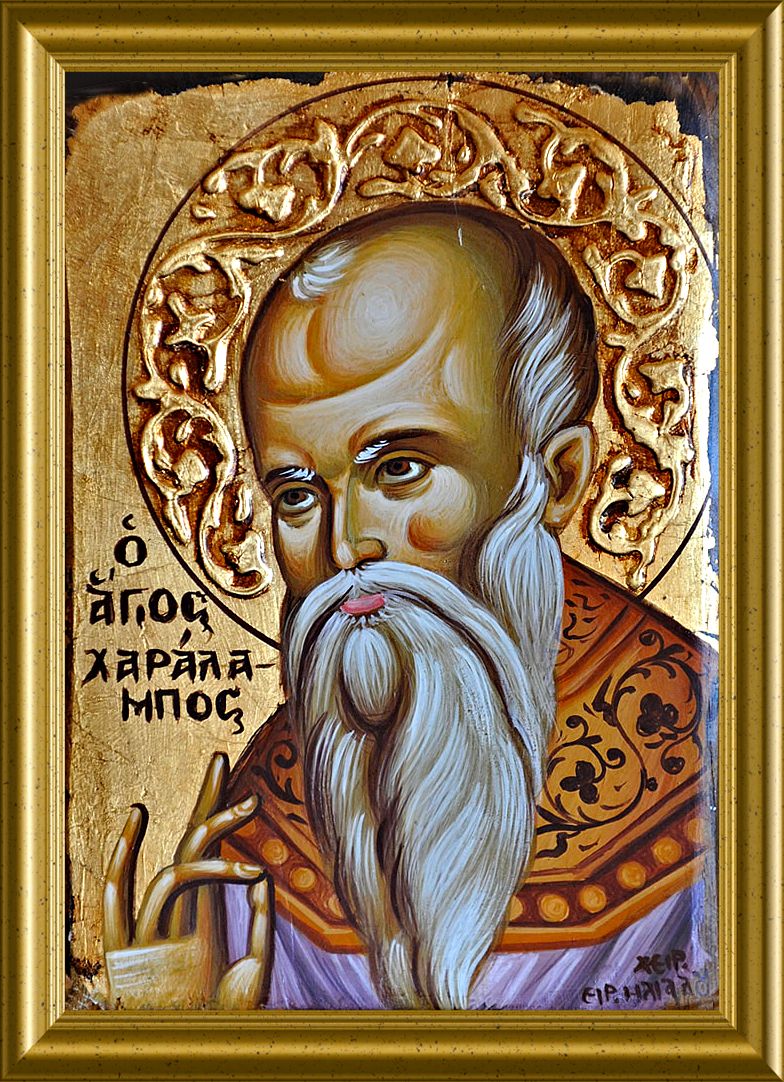 (The Saint is commemorated on February 10)


Miracle of St Haralambos in Filiatra (1943)

O wise Haralambos, you were proven an unshakable pillar of the Church of Christ; an evershining lamp of the universe. You shone in the world by your martyrdom. You delivered us from the moonless night of idolatry, O blessed One. Wherefore, boldly intercede to Christ that we may be saved.

Many of the weighty difficulties which befall man have their cause, known or unknown, in his past. However, the causes of these weighty difficulties, let us say mental disorder, are nothing else than the transgression of the moral law of God.
When St. Haralambos was being tortured, the persecuting emperor found out about his miracle-working power and ordered an insane man to be brought to Haralambos so that the emperor could be convinced that Haralambos could heal him. The devil tormented this man for thirty-five years driving him into the wilderness and hills and hurling him into mud or into gorges. When this deranged person approached Haralambos, the demon sensed a sweet-smelling fragrance emanating from this holy man and shouted: "I beg you, O servant of God, do not torment me before my time, rather command me and I will depart and, if you wish, I will tell you how it came about that I entered into this man." The saint commanded the demon to relate the story. The demon said: "This man wanted to steal from his neighbor and thought to himself: `If I don't kill the man first, I will not be able to seize his goods.' He proceeded and killed his neighbor. Having caught him in the act, I entered him and behold for thirty-four years I dwelt in him." Upon hearing this, the saint of God commanded the demon to depart from the man immediately and to leave him in peace. The demon departed and the demented man was restored to health and became tranquil.
Kontakion in the Fourth Tone

O Priest-martyr, athlete, champion Haralambos, your relics are a priceless treasure of the Church. Wherefore she rejoices, glorifying the Creator.

St Haralambos & the Sacrifice of the Bull
The Municipality of Agia Paraskevi is situated in the center of the island of Lesvos, among the hills and close to the plain of Kalloni. Agriculture and cattle raising are the main income sources of the Municipality.

The Municipality of Agia Paraskevi is famous for the "Religious Festival of Tavros". This festival is the most important popular activity of the village of Agia Paraskevi and it combines a variety of happenings that regard the ritual of the bull's (tavros) sacrifice. An agricultural group called "Το Ισνάφι των Ζευγάδων" (Agricultural Association "The Progress") revived this ancient custom in 1774. It was established as a reverence to St Haralambos, the protector of this agricultural group (Το Ισνάφι) that organises this festival (St. Haralambos os the patron saint of ploughmen).

The festival is linked to an old story: "During the period of Turkish occupation, a Turk stole a bull. Each time he tried to kill it, a bright light shone in his eyes, until eventually, he gave the bull back."

The incomes of this celebration are used for the inhabitants' common profit. The activities that take place during the celebration of this festival are the following:

The inhabitants gather the necessary materials (wheat etc.) for the preparation of the traditional meal ("kiskek"). The carrying of the decorated bull around the village takes place with the participation of the local orchestra. The pilgrims ride decorated horses accompanied by the local traditional orchestra. Sacrifice of the bull takes place at the chapel of St Haralambos situated at the evergreen mountain of Tavros that rests nearly 30 minutes outside of the village in a remote location.

Throughout the night, preparation of the traditional meal is accompanied by popular dances. The inhabitants return to the village, where a parade of horses and horse races take place. Amusement at the central square of the village takes place with the visitors' participation. On the last night of the festival, local inhabitants have fun until the next morning.

These festivals that take place at the village of Agia Paraskevi last for several days; they start from Friday and last until Monday, usually in the middle of June. The dances and the songs as well as the popular orchestras that play traditional music from Lesvos and from the village of Agia Paraskevi and Asia Minor are of a great importance at those festivals. The Religious Festival of Tavros takes place at the end of the spring and coincides with the preparation of the harvest.
Source-Mystagogy
Posted by Tom Manakis at 2/09/2015 09:46:00 am No comments: Links to this post