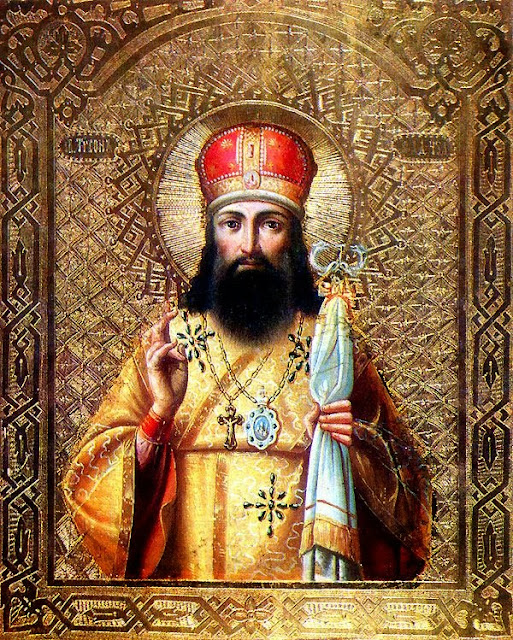 Saint Tikhon Of Zadonsk
"He that believeth and is baptised shall be saved" (Mk. 16:16). Our Lord and Saviour gave us this saying for our confirmation and consolation. For what is more comforting to a faithful and baptized soul than this saying that promises it eternal salvation?

Theophan the Recluse, On prayer, Homily 1 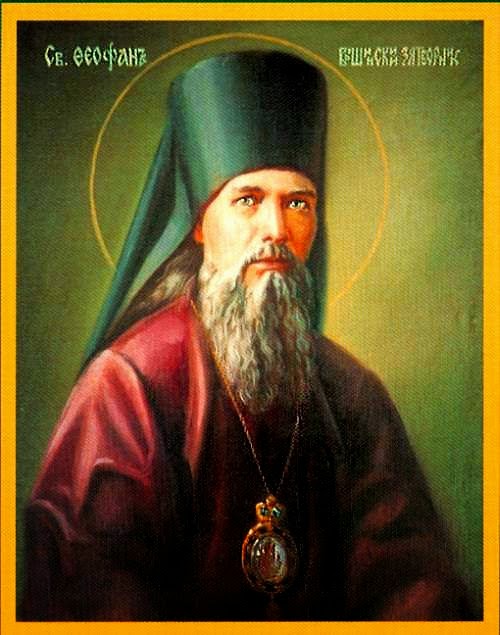 On the feast day of the Entrance into the Temple of the Most-holy Theotokos,(November21,new calendar) I find it timely to give you instruction in prayer - the main work of the temple. A temple is a place of prayer and arena of prayer's development. For us, entry into the temple is entry into a prayerful spirit. The Lord has the kindness to call our hearts His temple, where we enter mentally and stand before Him, ascending to Him like the fragrant smoke of incense. We are going to study how to attain this state.


Gathering in the temple, you pray, of course. And in praying here, you surely ought not abandon prayer at home. Therefore, it would be extraneous to speak to you about our duty to pray, when you already pray. But I do not think that it is extraneous in any way to give you two or three rules about how to pray, if not in the way of teaching, then simply as a reminder. The work of prayer is the first work in Christian life. If in everyday affairs the saying: "live and learn" is true, then so much more it applies to prayer, which never stops and which has no limit.


Let me recall a wise custom of the ancient Holy Fathers: when greeting each other, they did not ask about health or anything else, but rather about prayer, saying "How is your prayer?" The activity of prayer was considered by them to a be a sign of the spiritual life, and they called it the breath of the spirit. If the body has breath, it lives; if breathing stops, life comes to an end. So it is with the spirit. If there is prayer, the soul lives; without prayer, there is no spiritual life.


However, not every act of prayer is prayer. Standing at home before your icons, or here in church, and venerating them is not yet prayer, but the "equipment" of prayer. Reading prayers either by heart or from a book, or hearing someone else read them is not yet prayer, but only a tool or method for obtaining and awakening prayer. Prayer itself is the piercing of our hearts by pious feelings towards God, one after another – feelings of humility, submission, gratitude, doxology, forgiveness, heart-felt prostration, brokenness, conformity to the will of God, etc. All of our effort should be directed so that during our prayers, these feelings and feelings like them should fill our souls, so that the heart would not be empty when the lips are reading the prayers, or when the ears hear and the body bows in prostrations, but that there would be some qualitative feeling, some striving toward God. When these feelings are present, our praying is prayer, and when they are absent, it is not yet prayer.


It seems that nothing should be simpler and more natural for us than prayer and our hearts' striving for God. But in fact it is not always like this for everyone. One must awaken and strengthen a prayerful spirit in oneself, that is one must bring up a prayerful spirit. The first means to this is to read or to hear prayers said. Pray as you should, and you will certainly awaken and strengthen the ascent of your heart to God and you will come into a spirit of prayer.


In our prayer books, there are prayers of the Holy Fathers - Ephraim the Syrian, Makarios the Egyptian, Basil the Great, John Chrysostom, and other great men of prayer. Being filled with the spirit of prayer, they were able to up that living spirit into words, and handed it down to us. When one enters into these prayers with attention and effort, then that great and prayerful spirit will in turn enter into him. He will taste the power of prayer. We must pray so that our mind and heart receive the content of the prayers that we read. In this way the act of praying becomes a font of true prayer in us. I will give here three very simple instructions: 1. always begin praying with at least a little preparation; 2. do not pray carelessly, but with attention and feeling; and 3. do not go on to ordinary work immediately after prayer.


Even if prayer is common for us, it always demands preparation. What is more common for those who can read and write than reading and writing? However, sitting down to read or write, we do not immediately begin, but we calm ourselves before beginning, at least to the point that we can read or write in a peaceful state. Even more so preparation for the work of prayer is necessary before praying, especially when what we have been doing before praying is of a totally different nature from prayer.


Thus, going to pray, in the morning or in the evening, stand for a moment, or sit, or walk, and strive in this time to focus your thoughts, casting off from them all earthly activities and objects. Then call to mind the One to Whom you are praying, Who He is and who you are, as you begin this prayerful petition to Him. From this, awaken in your soul the feeling of humility and reverent awe of standing before God in your heart. As you stand piously before God, all of this preparation may seem small and insignificant, but it is not small in meaning. This is the beginning of prayer and a good beginning is half the work.


Having stood up in your heart, now stand before your icons, make a few prostrations, and begin with the usual prayers: "Glory to Thee, our God, glory to Thee. O Heavenly King…", and so on. Do not read hurriedly; pay attention to every word and let the meaning of each word enter into your heart. Accompany your words with prostrations. With this effort, the reading of prayers becomes pleasant to God and fruit-bearing. Pay attention to every word, and let the sense of each word enter into your heart; understand what you are reading and feel what you are understanding. No other rules are necessary. These two – understanding and feeling – have the effect of making prayer fitting, and fruitful. For example, you read: "cleanse us from every stain" - feel your stain, desire cleanliness, and ask it from the Lord with hope. You read: "forgive us our debts as we forgive our debtors" - forgive all in your soul, and having forgiven everyone everything in your heart, ask for forgiveness for yourself from the Lord. You read: "Thy will be done" - completely give up your own will to the Lord in your heart, and honestly be prepared to meet everything that the Lord is well-pleased to send to to you with a good heart. If you read each verse of your prayers in this way, then you will be truly praying.


In order to facilitate the development of true prayer, take these steps: 1) keep a prayer rule according to the blessing of your spiritual father - not more than you can read unhurriedly on a normal day; 2) before you pray, in your free time become familiar with the prayer in your rule, fully take in each word and feel it, so that you would know in advance what should be in your soul as you read. It will be even better if you learn the prayers by heart. When you do this, then all of your prayers will be easy for you to remember and feel. There is only one final difficulty: your thoughts will always stray to other subjects, therefore: 3) you must struggle to keep your attention focused on the words of your prayer, knowing in advance that your mind will wander.


When your mind does wander during prayer, bring it back. When it wanders again, bring it back again. Each and every time that you read a prayer while your thoughts are wandering (and consequently you read it without attention and feeling,) then do not fail to read it again. Even if your mind wanders several times in the same place, read it again and again until you read it all the way through with understanding and feeling. In this way, you will overcome this difficulty so that the next time, perhaps, it will not come up again, or if it does return, it will be weaker. This is how one must act when the mind wanders. On the other hand it may happen that a particular word or phrase might act so strongly on the soul, that the soul no longer wants to continue with the prayer, and even though the lips continue praying, the mind keeps wandering back to that place which first acted on it. In this case: 4) stop, do not read further, but stand with attention and feeling in that place, and use the prayer in that place and the feelings engendered by it to feed your soul. Do not hurry to get yourself out of this state. If time cannot wait, it is better to leave your rule unfinished than to disturb this prayerful state. Maybe this feeling will stay with you all day like your guardian Angel! This sort of grace-filled action on the soul during prayer means that the spirit of prayer is becoming internalized, and consequently, maintaining this state is the most hopeful means of raising up and strengthening a spirit of prayer in your heart.


Finally, when you finish your prayers, do not immediately go off to any sort of work, but remain and think at least a little about what you have just finished and what now lies before you. If some feeling was given to you during prayer, keep it after you pray. If you completed your prayer rule in the true spirit of prayer, then you will not wish to quickly go about other work; this is a property of prayer. Thus our ancestors said when they returned from Constantinople: "he who has tasted sweet things does not desire bitter things". So it is with each person who has prayed well during his prayers. One should recognize that tasting this sweetness of prayer is the very goal of praying, and if praying leads to a prayerful spirit, then it is exactly through such a tasting.


If you will follow these few rules, then you will quickly see the fruit of prayerful labor. And he who fulfills them already without this instruction, of course, is already tasting this fruit. All praying leaves prayer in the soul - continual prayer in this manner gives it root, and patience in this work establishes a prayerful spirit. May God grant this to you by the prayers of our All-pure Mistress, the Theotokos!


I have given you initial basic instruction in the ways of raising up in yourselves a prayerful spirit, that is, how to pray in a way appropriate to the meaning of prayer - at home in the morning and the evening, and here in the temple. But this is not yet everything. Tomorrow, if God helps, I will teach you a second method. Amen.