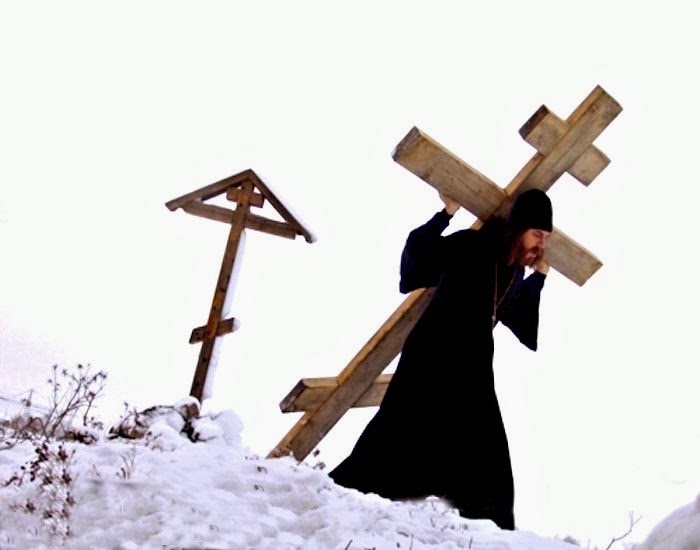 And He, bearing His cross, went forth into a place called the place of a skull, which is called in the Hebrew Golgotha: where they crucified Him, and two others with Him, on either side one, and Jesus in the midst” (John 19:17-18).
The major tenet of Christian moral teaching is the teaching about the narrow path or the bearing of one’s cross. Saint Ignatius Bryanchaninov indicates that the narrow path has been established by God Himself for His true followers.

“Our Lord Jesus Christ spent His earthly life in the greatest humbleness, being subjected to constant sorrows and harassment, being persecuted, slandered, humiliated by His enemies, who finally sent Him to a shameful death with criminals. The path of salvation that leads to eternal life has been established by the Lord as a narrow way full of sorrows – established both by the Lord’s holy example and by His holy teaching. The Lord advised His disciples and His followers that they would be sorrowful in the world, i.e. during their earthly lives, that the world would hate them, would persecute and humiliate them, would put them to death. The Lord likened His disciples’ and followers’ situation among depraved humanity to that of sheep among wolves. From this we can see that a life on earth full of trials and tribulations is the Lord’s own establishment for His true servants. And being the Lord’s own establishment, it cannot be deflected by any human means, any wisdom, any sensibility, any prudence, any vigilance.”

The great Russian pastor Protopriest Valentin Amphiteatrov also paid a great deal of attention to the Holy Fathers’ teaching on the bearing of one’s cross, and provided constant instruction on the proper endurance of sorrows, unquestioning fortitude, and complete submission to the will of God.


“Let us, Christians, follow the example of the Mother of God and immerse our will in the will of the Almighty, awaiting from Him instruction and aid in all good things…” “Why does the Saviour exhibit such wondrous tranquility amid the most terrible suffering? – because of His complete submission to the will of God the Father. He suffered, He pleaded in His humanity to have the chalice of suffering pass Him by. But the moment arrived in which He ended with a prayer: not as I will, but as Thou wilt. After that the Saviour no longer prayed to have His predestined chalice of suffering pass Him by…


The Lord showed such an example so that we, too, would seek tranquility in absolute submission to the will of God. For this reason He demands self-sacrifice from us, saying: whoever wishes to follow Me should deny himself. It is as though He were saying: whoever wishes to attain the perfection prescribed in the Gospel should reject his own will and live according to God’s commandment, because without God’s will even a single hair will not fall from your head. Do not pay any attention to things that are both pleasant and unpleasant for your vanity. Do not depend on mighty protectors and do not be offended by your visible enemies. Pleasant things are given to you for you not to become despondent, while unpleasant ones are given so that you do not overstep yourself. The mighty of this world may offer support to you only if God allows it, while persecutors may torment, humiliate, and harm you only as long as God allows it. Raise you mind and heart to God, and you will easily believe that God decisively rules over everything. One can do evil without the will of God, but even evil itself leads to a point at which good becomes clearer and more precious.”


In showing that life on earth does not represent any real joy or comfort except for the hope of salvation, St. Ignatius explains that the entire Christian life on earth consists solely of repentance. “Having taken upon Himself the human flesh and all human weaknesses except sin, the Lord also took penitence upon Himself… The innocent and most holy Lord, having suffered in His humanity for the guilty and sin-infected mankind, has shown suffering to be the path of salvation for all His followers, for all those of His provenance and ancestry… The innocent and most holy Lord spent His entire earthly life in suffering: even more so should the guilty suffer in full realization that they deserve to suffer; they should rejoice that by means of short-lived suffering they are delivered from eternal torment, they enter the ranks of the Lord’s followers and intimate ones. Whoever rejects suffering does not believe himself worthy of it, – such a one does not acknowledge his fall and damnation! Whoever passes his earthly life in pleasure – such a one renounces his own salvation!”


Acknowledging oneself worthy of all manner of punishment leads to a knowledge of the Saviour, as can be seen in the example of the wise thief. Some may say, perhaps, that the thief was an obvious criminal, and thus such a repentant state was natural for him. However, the other thief who was crucified next to Christ was likewise an obvious criminal, and yet he did not arrive at a realization of his sinfulness because there was no mercy or humility in his heart, but only hardness and pride. God’s saints continuously thought of themselves as sinners despite evident gifts of grace; the greatest villains, on the contrary, justified themselves and, being up to their neck in evil deeds, did not cease to proclaim their own virtue.”


All righteous people spent their earthly lives in sorrow: “For whom the Lord loveth He chasteneth, and scourgeth every son whom He receiveth” (Heb. 12:6). When the Lord came across the virtuous youth in the Gospel, He offered him to follow after Him, taking up his cross. Let us not reject the summons! The summons is accepted when, upon the arrival of sorrows, a Christian deems himself worthy of these tribulations; a Christian takes up his cross and follows the Lord when he thanks and glorifies God for all the sorrows that have been sent, when he submits himself entirely to the will of God, when he fulfills the Gospel commandments, especially the commandment on loving one’s enemies.


The Holy Spirit Himself extends a celestial greeting to those who have been subjected to misfortunes: “My brethren, count it all joy when ye fall into diverse temptations” (James 1:2). “Blessed are ye, when men shall revile you, and persecute you, and shall say all manner of evil against you falsely, for My sake. Rejoice, and be exceeding glad: for great is your reward in heaven” (Matt. 5:11-12).


Nowadays this teaching is especially important, because, according to the prophecies of the Holy Fathers, in the end times the monastics and all Christians will be saved primarily through endurance of sorrows. Other endeavors: fasting, spiritual labors, great physical feats, nightly vigils, etc. will be taken away from us because of a paucity of spiritual and physical strength. “One time the Holy Fathers of an Egyptian skete were prophetically discoursing about the last generation. “What did we do?” – they said. One of them, the great abba Ischerion, replied: “We fulfilled God’s commandments.” They asked him: “What will those who come after us do?” “They, – said the abba, - will fulfill only half of our endeavors.” And again he was asked: “And what will those who come after them do?” Abba Ischerion replied: “They will not engage in any monastic endeavors, but they will be subjected to sorrows, and those of them who endure will have a higher standing than either we or our fathers.”


The same applies to the whole of Christendom! 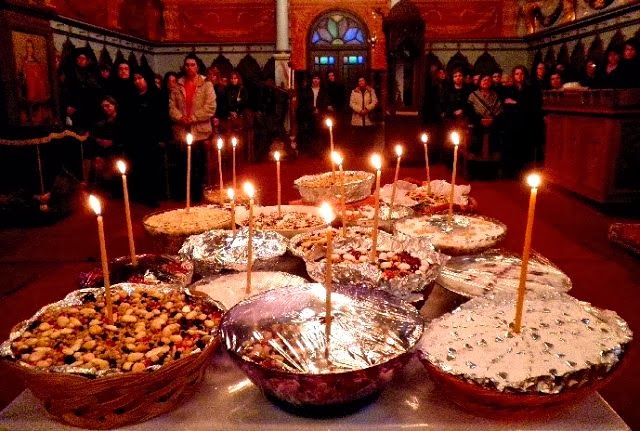