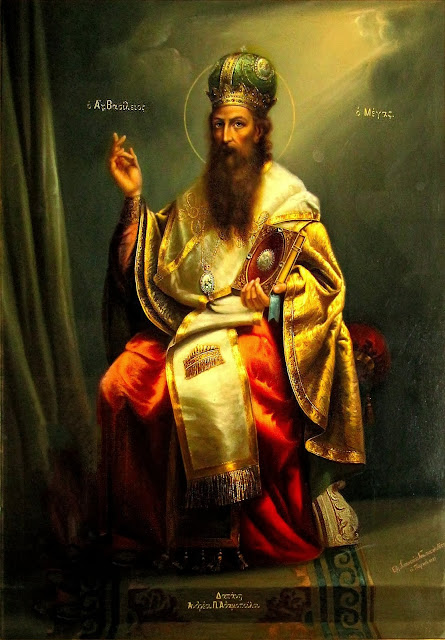 A tale of Photios Kontoglou

(Describes a visit of St. Basil on the eve of his feast, years after his repose. Translated from the Greek original.*)
The Nativity Feast having passed, St. Basil took his staff and traversed all of the towns, in order to see who would celebrate his Feast Day with purity of heart. He passed through regions of every sort and through villages of prominence, yet regardless of where he knocked, no door opened to him, since they took him for a beggar. And he would depart embittered, for, though he needed nothing from men, he felt how much pain the heart of every impecunious person must have endured at the insensitivity that these people showed him. One day, as he was leaving such a merciless village, he went by the graveyard, where he saw that the tombs were in ruins, the headstones broken and turned topsy-turvy, and how the newly dug graves had been turned up by jackals. Saint that he was, he heard the dead speaking and saying: “During the time that we were on the earth, we labored, we were heavy-burdened, leaving behind us children and grandchildren to light just a candle, to burn a little incense on our behalf; but we behold nothing, neither a Priest to read over our heads a memorial service nor kóllyva, as though we had left behind no one.” Thus, St. Basil was once again disquieted, and he said to himself, “These villagers give aid neither to the living nor to the deceased,” departing from the cemetery and setting out alone in the midst of the freezing snow.

On the eve of the New Year, he came upon a certain hamlet, which was the poorest of the poor villages in all of Greece. The freezing wind howled through the scrub bush and the rocky cliffs, and not a living soul was to be found in the pitch-dark night! Then, he beheld in front of him a small knoll, below which there was secreted away a sheepfold. St. Basil went into the pen and, knocking on the door of the hut with his staff, called out: “Have mercy on me, a poor man, for the sake of your deceased relatives, for even Christ lived as a beggar on this earth.” Awakening, the dogs lunged at him.

But as they drew near him and sniffed him, they became gentle, wagged their tails, and lay down at his feet, whimpering imploringly and with joy. Thereupon, a shepherd, a young man of twenty-five or so, with a curly black beard, opened the door and stepped out: John Barbákos—a demure and rugged man, a sheepman. Before taking a good look at who was knocking, he had already said, “Enter, come inside. Good day, Happy New Year!”

Inside the hut, a lamp was suspended overhead from a cradle that was attached to two beams. Next to the hearth was their bedding, and John’s wife was sleeping. As soon as St. Basil went inside, John, seeing that the old man was a clergyman, took his hand and kissed it, saying, “Your blessing, Elder,” as though he had known him previously and as though he were his father. And the Saint said to him: “May you and all of your household be blessed, together with your sheep, and may the peace of God be upon you.” The wife then arose, and she, too, reverenced the Elder and kissed his hand, and he blessed her. St. Basil looked like a mendicant monk, with an old skoúphia, his rása worn and patched, and his tsaroúchia [a traditional leather slipper, usually adorned with a pompom at the end of the shoe] full of holes; as well, he had an old empty-looking satchel. John the blessed put wood on the fire. Straightway the hut began to glisten, as though seemingly a palace. The rafters seemed to be gilded with gold, while the hanging cheesecloth bags [filled with curing cheese] looked like vigil lamps, and the wooden containers, cheese presses, and all of the accessories used by John in making cheese became like silver, as though decorated by diamonds, as did all of the other humble things that John the blessed had in his hut. The wood burning in the hearth crackled and sang like the birds that sing in Paradise, giving off a fragrance wholly delightful. The couple placed St. Basil near the fire, where he sat, and the wife put down pillows on which he could rest. Then the Elder took the satchel from around his neck, placing it next to him, and removed his old ráson (outside cassock), remaining in his zostikó [inner cassock].

Together with his farmhand, John the blessed went out to milk the sheep and to place the newborn lambs in the lambing pen, and afterwards he separated the ewes that were ready to birth and confined them within the enclosure, while his helper put the other sheep out to graze. His flock was sparse and John was poor; yet, he was blessed. And he was possessed of great joy at all times, day and night, for he was a good man and he had a good wife. Anyone who happened to pass by their hut they cared for as though he were a brother. And it is thus that St. Basil found lodging in their home and settled in, as if it were his own, blessing it from top to bottom. On that night, he was awaited, in all of the cities and villages of the known world, by rulers, Hierarchs, and officials; but he went to none of these. Instead, he went to lodge in the hut of John the blessed.

So, John, after pasturing the sheep, came back in and said to the Saint, “Elder, I am greatly joyful. I wish to have you read to us the writings about St. Basil [i.e., the appointed hymns to the Saint]. I am an illiterate man, but I like all of the writings of our religion [once again, the hymns and services of the Church]. In fact, I have a small book from an Hagiorite Abbot [i.e., from Mt. Athos], and whenever someone who can read and write happens to pass by, I get him to read out of the booklet, since we have no Church near us.”

In the East, it was dimly dawning. St Basil rose and stood, facing eastward, making his Cross. He then bent down, took a booklet from his satchel, and said, “Blessed is our God, always, now and ever, and unto the ages of ages.” John the blessed went and stood behind him, and his wife, having nursed their baby, also went to stand near him, with her arms crossed [over her chest]. St. Basil then said the hymn, “God is the Lord...” and the Apolytikion of the Feast of the Circumcision, “Without change, Thou hast assumed human form,” omitting his own Apolytikion, which states, “Thy sound is gone forth unto all the earth.” His voice was sweet and humble, and John and his wife felt great contrition, even though they did not understand all of the words. St. Basil now said the whole of Matins and the Canon of the Feast, “Come, O ye peoples, and let us chant a song unto Christ God,” without reciting his own canon, which goes, “O Basil, we would that thy voice were present....” Thereafter, he said aloud the entire Liturgy, pronounced the dismissal, and blessed the household. As they sat at the table, having eaten and finished their food, the wife brought the Vasilopeta [a sweet bread or cake baked in honor of St. Basil on the New Year] and placed it on the serving table. Then St. Basil took a knife and with it traced the sign of the Cross on the Vasilopeta, saying, “In the name of the Father and of the Son and of the Holy Spirit.” He cut a first piece, saying, “for Christ,” a second, afterwards, saying, “for the Panagia,” and then “for the master of the house, John the blessed.” John exclaimed, “Elder, you forgot St. Basil!” The Saint replied, “Yes, indeed,” and thus said, “And for the servant of God, Basil.” After this, he resumed: “...and for the master of the house,” “for the mistress of the house,” “for the child,” “for the farmhand,” “for the animals,” and “for the poor.” Thereupon, John the blessed said, “Elder, why did you not cut a piece for your reverendship?” And the Saint said, “But I did, O blessed one!” But John, this blissful man, did not understand.

Afterwards, St. Basil stood up and said the prayer, “O Lord my God, I know that I am not worthy that Thou shouldest enter under the roof of the house of my soul.” John the Blessed then said: “I wonder if you can tell me, Elder, since you know many things, to what palaces St. Basil went this evening? And the rulers and monarchs—what sins do they have? We poor people are sinners, since our poverty leads us into sin.” St. Basil said the same prayer, again—with tears—though changing it: “O Lord my God, I have seen that Thy servant John the simple is worthy and that it is meet that Thou shouldest enter into his shelter. He is a babe, and it is to babes that Thy Mysteries are revealed.” And again John the blissful, John the blessed, understood nothing....

* This well-known and charming short story by Phótios Kóntoglou has appeared in several versions, both in Greek and in what are, unfortunately, largely poor English translations. Kontoglou’s Greek is quite difficult to translate, since he uses many words common to the dialect of Greeks in Asia Minor. Though some of these words are actually derived from ancient Greek, in general they are part of a language spoken today by less literate Greeks. Thus, there is a tendency to render them in English slang, which detracts from the power of Kontoglou’s Greek and his writing and imagery. At other times, translators fail at finding the middle ground between stilted literal translations and translations which add so much to the original Greek texts that Kontoglou’s characteristic literary style is lost. I have used, here, the Greek text published by Harmos Publications (Athens, Greece, 1994) in its collection Diegémata ton Christougénnon, and have tried to capture in my rendering the style, simple eloquence, and sensitivity of the author’s story as it reads in Greek—Archbishop Chrysostomos of Etna.
Posted by Tom Manakis at 12/30/2013 02:45:00 pm No comments: