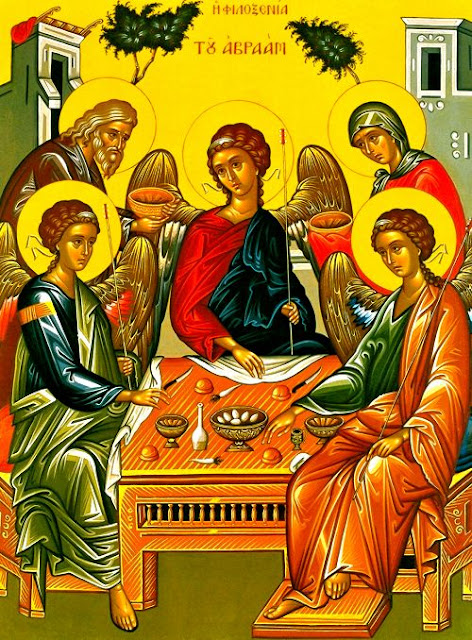 St. Gregory the Theologian-On the Revelation of the Holy Spirit 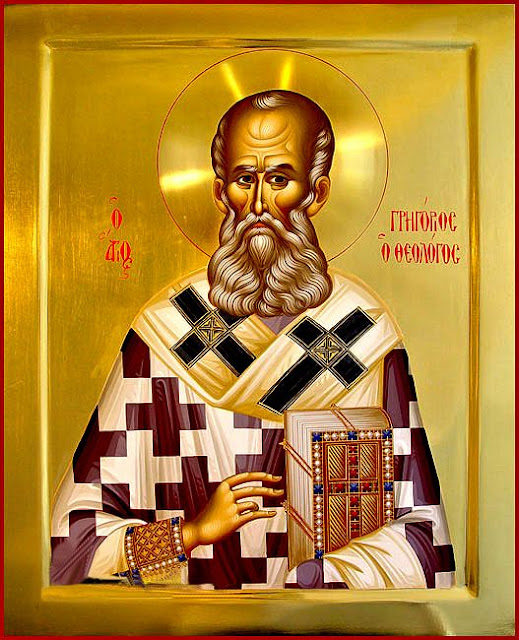 St. Gregory the Theologian ca. 329-389
The Old Testament proclaimed the Father openly, and the Son more obscurely. The New manifested the Son, and suggested the Deity of the Spirit. Now the Spirit Himself dwells among us, and supplies us with a clearer demonstration of Himself. For it was not safe, when the Godhead of the Father was not yet acknowledged, plainly to proclaim the Son; nor when that of the Son was not yet received to burden us further (if I may use so bold an expression) with the Holy Ghost; lest perhaps people might, like men loaded with food beyond their strength, and presenting eyes as yet too weak to bear it to the sun’s light, risk the loss even of that which was within the reach of their powers; but that by gradual additions, and, as David says, Goings up, and advances and progress from glory to glory, the Light of the Trinity might shine upon the more illuminated. For this reason it was, I think, that He gradually came to dwell in the Disciples, measuring Himself out to them according to their capacity to receive Him, at the beginning of the Gospel, after the Passion, after the Ascension, making perfect their powers, being breathed upon them, and appearing in fiery tongues. And indeed it is little by little that He is declared by Jesus, as you will learn for yourself if you will read more carefully. I will ask the Father, He says, and He will send you another Comforter, even the spirit of Truth. This He said that He might not seem to be a rival God, or to make His discourses to them by another authority. Again, He shall send Him, but it is in My Name. He leaves out the I will ask, but He keeps the Shall send, then again, I will send,—His own dignity. Then shall come, the authority of the Spirit.

You see lights breaking upon us, gradually; and the order of Theology, which it is better for us to keep, neither proclaiming things too suddenly, nor yet keeping them hidden to the end. For the former course would be unscientific, the latter atheistical; and the former would be calculated to startle outsiders, the latter to alienate our own people. I will add another point to what I have said; one which may readily have come into the mind of some others, but which I think a fruit of my own thought. Our Saviour had some things which, He said, could not be borne at that time by His disciples (though they were filled with many teachings), perhaps for the reasons I have mentioned; and therefore they were hidden. And again He said that all things should be taught us by the Spirit when He should come to dwell amongst us. Of these things one, I take it, was the Deity of the Spirit Himself, made clear later on when such knowledge should be seasonable and capable of being received after our Saviour’s restoration, when it would no longer be received with incredulity because of its marvelous character. For what greater thing than this did either He promise, or the Spirit teach. If indeed anything is to be considered great and worthy of the Majesty of God, which was either promised or taught.

This, then, is my position with regard to these things, and I hope it may be always my position, and that of whosoever is dear to me; to worship God the Father, God the Son, and God the Holy Ghost, Three Persons, One Godhead, undivided in honour and glory and substance and kingdom, as one of our own inspired philosophers not long departed showed. Let him not see the rising of the Morning Star, as Scripture says, nor the glory of its brightness, who is otherwise minded, or who follows the temper of the times, at one time being of one mind and of another at another time, and thinking unsoundly in the highest matters. For if He is not to be worshipped, how can He deify me by Baptism? But if He is to be worshipped, surely He is an Object of adoration, and if an Object of adoration He must be God; the one is linked to the other, a truly golden and saving chain. And indeed from the Spirit comes our New Birth, and from the New Birth our new creation, and from the new creation our deeper knowledge of the dignity of Him from Whom it is derived. This, then, is what may be said by one who admits the silence of Scripture.
(Oration 31: Fifth Theological Oration 26-29)
Posted by Tom Manakis at 1/25/2013 04:12:00 pm No comments: Links to this post