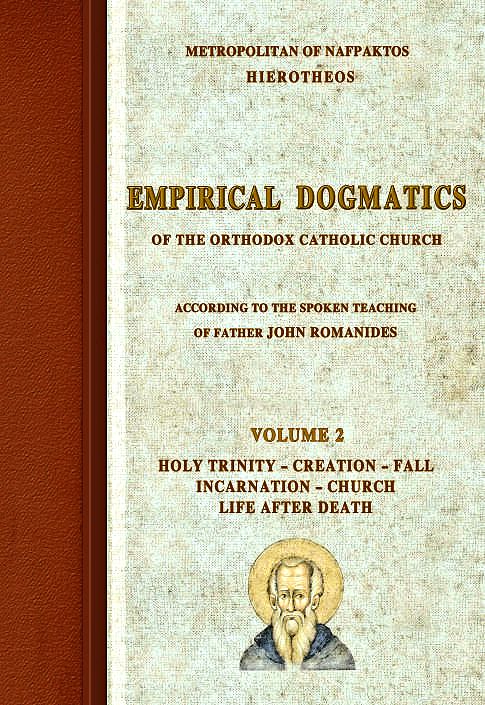 It is very clear…that theology is not linked with philosophy, because they are two different paths. Theology is based on theoria (vision) of God, whereas philosophy is based on human reason, speculation. The holy Fathers of the Church were theologians who beheld God, not philosophers. When they formulated dogmas, they did not do so in a philosophical way, or in order to understand them or to develop philosophy.

“When someone really digests the statement, ‘It is impossible to express God and even more impossible to conceive Him,’ he also gains a good understanding of the efforts of contemporary theologians.

Theology students have been given the impression that the university professor of dogmatics or history of dogmas, being very intelligent and having studied philosophy, logic and so on, is someone with a profound mind who conceives God and dogmas. Therefore when he says, ‘one essence, three hypostases’, he understands it. All these professors ignore Gregory the Theologian’s words, ‘It is impossible to express God and even more impossible to conceive Him.'”

Dogma cannot be approached from a metaphysical angle. In Western theology metaphysics dominated even in dogmatic issues, which is why Western dogmatics was not successful.

“It is impossible to approach dogma about God and the subject of perfection through metaphysics.”

“In the West, since metaphysics was predominant, they thought that metaphysics was independent of success. The Americans have identified truth with success. Whatever is successful is true. If something is unsuccessful, it is not true.

Metaphysics may be true without having any success. This truth is independent of success. Orthodox people who followed this line also made a metaphysical approach to theological issues and suffered the same fate. They think of dogmas as metaphysical phenomena, as metaphysical realities, which have no connection with the meaning of success, and are something separate from success. They are truths in themselves.”

The holy Fathers, however, were not metaphysical philosophers, so it is impossible for the Orthodox tradition to be interpreted through metaphysics.

In patristic theology, however, we have the famous saying of Gregory the Theologian, the compass for every Orthodox theologian, which tells us, ‘It is impossible to express God and even more impossible to conceive Him.’ We can neither describe God in words nor understand Him. For that reason words and concepts about God do not “express” God. They are simply part of the ascetic means by which man attains, if he ever does attain, to glorification-theosis.

The fact that dogma is temporary removes all metaphysical meaning from Orthodox theology. Metaphysics cannot be founded upon Orthodox tradition. For the same reason the philosophical approach to theology is completely foreign to the Orthodox tradition.”

Western theology was closely connected with metaphysics, so there was a serious reaction against it from the Enlightenment.

This does not happen in the Orthodox Church, which regards dogmas as expressions of experience and not metaphysical speculations.

“Augustine is the only Orthodox theologian of the early Church who confused dogma and mystery, and believed that it was possible to understand the mystery by means of dogma. For the Fathers of the Church, on the contrary, dogma does not lead to comprehension of the mystery, but to union with the mystery. And this mystery, even in union, goes beyond all human categories.”

Augustine identified theology with philosophy. The dogma of the Holy Trinity is also regarded as part of natural revelation, whereas the dogma concerning the incarnation belongs to supernatural revelation.

As time passed, however, in the Western tradition — this view of Platonists and so on — it began to be considered in the Middle Ages that the doctrine of the Holy Trinity was also part of the supernatural revelation. This means — and you will see in the neo-scholastic textbooks of the Papal Church, particularly from the dogmatic standpoint — that they no longer write in the same way. You see that the doctrine of the Holy Trinity is part of the supernatural revelation and no longer of the natural revelation.”

Augustine also puts faith first, followed by knowledge. He said that we accept dogmas in order to understand them and learn the truth through the process of rational thought.

“In the penultimate chapter of Contra Academicos, which is a summary of all the others, he tells us the most important fact: that we are now convinced that we believe ‘that we might know the truth’. I believe in order to understand.

The basic presupposition of all the scholastic theology of the Middle Ages is that, in order to understand the truth, someone must first accept the truth by faith. Once he has accepted the truth or the dogma by faith, he then makes an effort through reasoning and afterwards he actually understands.”
The Western tradition maintains that, by means of the philosophical method and profound reasoning, we can understand the dogmas of faith. This runs counter to the Orthodox tradition, where dogmas are the fruit of experience, not human axioms aimed at leading us to rational understanding.

“This method of Augustine’s, that on the basis of faith, assisted by the philosophical method and profound reflection, we shall come to understand the dogmas of the Church, became the basic method of the Frankish tradition in the West.

This view of the patristic tradition is in all the textbooks — as far as I know and have been able to check — in all the textbooks here in Greece from high school up to university. They constantly follow this line: that faith must be changed into knowledge, into understanding, and this is achieved with the help of philosophy.

Here, modern Greek theology, due to modern Greek patriotism along the lines drawn up by Korais, put the purist form of the Greek language and philosophy at the heart of Greek education in the early years. It was considered indispensable for a theologian, particularly a systematic or dogmatic theologian, to have mastered philosophy, so that he could ponder correctly on the dogmas of the faith. In the patristic tradition, however, we have purification, we have illumination and afterwards we have glorification=theosis.”

In addition to this mistaken method, in which faith precedes knowledge, the Church is regarded as the authority instead of the glorified Fathers, as we encounter in the Orthodox tradition.

“Augustine put faith first and knowledge comes afterwards. The fundamental presupposition of Augustine is that man cannot know the truth through his reason alone, but his reason must first know the truth through faith. Faith comes first. Someone accepts the dogmas by faith, and after that he understands the dogmas. So faith comes before knowledge.

In this way another curious theory of Augustine’s developed. Why do we accept dogmas? Because they are the Church’s dogmas, they are the teaching of the Church. For Augustine, the authority for their acceptance is the Church.

It is the first time that this perception appears. Whereas for us this perception does not exist. For us it is the Fathers, not the Church. The Church for us is not an abstract idea, which is an organised, ecclesiastical, hierarchical authority. For us it is ‘those who have experience'; the glorified are the reason why we accept the dogmas. The glorified, who have direct knowledge about God, are the foundation of our own faith. Those of us who do not have knowledge about God accept the teaching of those who have knowledge.

The same happens as in astronomy. Not all of us have looked through telescopes and seen the heavenly bodies. There are, however, astronomers who have done so. They describe things to us and even take photographs for us. We open a book on astronomy and, having confidence in the experience of the astronomers, we read all these things and accept them, since we are sure of the trustworthiness of these people.

In the same way, we have God-seers, who have beheld God, and we too accept what these people have said about God, until the time when we too, perhaps, may reach that state. Then we shall have the same experience and the same teaching again.”

We also find in Augustine that he uses psychological terms for the Holy Trinity.

“If anyone wants to do an analysis of Augustine’s book De Trinitate, it is a curious account. The significant thing is that the basic method used by Augustine — he was the first to undertake a psychoanalysis of the Holy Trinity — was to take humanistic psychology, Neoplatonic in this case, in order to investigate the dogma of the Holy Trinity and reflect more deeply upon it.

He makes comparisons between God and the human nous, memory and reason in order to understand the dogma of the Holy Trinity in a psychological way. We see scholastic theology deriving from this. Instead of occupying themselves with asceticism, they sat at their desks and devised theory and philosophical theory about the Holy Trinity. They thought that the great task of theologians was to sit and try to understand dogmas and understand God, the essence of God. Thus the great universities of Europe were built in the monasteries.