How to Recognize the Holy Apostles in Icons...

Icons are painted as windows into Heaven, and therefore to show the Heavenly, rather than earthly, reality. Nevertheless, Icons are made of the people we love: of the heroes of the faith who are remembered and whose earthly lives are considered instructive and worthy of imitation. Therefore it is natural that, as well as depicting them in a stylized “spiritual” way, the Saints are also depicted as recognizable people, with distinct features. This guide is just a brief description of how the Holy Apostles are depicted in Icons, so that they can be more easily recognized when encountered in churches, monasteries, or wherever else an icon is found.

The fiery and impulsive Leader of the Twelve, Peter is easily recognizable by his white, short, curly hair and beard. He is often shown holding a scroll, which may have words taken from one of his Epistles written upon it. In some icons he may also be shown with keys hanging from his belt, a reference to the words Jesus said to him: “And I will give unto thee the keys of the kingdom of heaven: and whatsoever thou shalt bind on earth shall be bound in heaven: and whatsoever thou shalt loose on earth shall be loosed in heaven.” He is often found in Icons with St. Paul, who were both martyred in Rome, holding together the Church, and showing their shared pre-eminence among the Apostles.

Though not one of the original Twelve, St. Paul has always been known as an Apostle (literally meaning “one who is sent out”), and moreover a leader of the Apostles. As such, he is often shown in Icons of the Apostles, including the one at the top of the page. Paul is always depicted with brown hair and beard tapering to one or two points. He is balding with a high forehead (signifying great wisdom and learning) but with a tuft of brown hair in the centre. He is often shown carrying a large Gospel book, an affirmation of the number of epistles he contributed to what became the New Testament. In addition, the Evangelist Luke was a physician who followed St. Paul on his missionary trips, so it is fair to say that Paul would also have had an influence upon the Gospel of Luke and the Book of Acts.

There are two common depictions of the Apostle John: as the “Beloved Disciple” and as “the Theologian”. The former Icon is of the young Apostle John – the John who rested upon the breast of Christ during the Last Supper. In any icon showing scenes from the life of Christ (e.g. the Transfiguration, the Crucifixion) or those depicted in the Acts of the Apostles (e.g. the Ascension or Pentecost) then St. John is shown as the beardless brown-haired youth, little more than sixteen years of age.


When John is painted in a “portrait”, rather than as part of a Biblical scene, then he is usually shown as the elderly John “the Theologian”. This is the John who, sixty years or so after the Resurrection of Christ, is exiled upon Patmos and writing both the Gospel of John and the Book of Revelation. He is shown with long white beard and high forehead, holding the Gospel book which led to his title “the Theologian”, often shown open to reveal some verses from the book. He may also be shown with an Eagle, the symbol of both John and his Gospel.

Like John, St. Matthew also authored a Gospel account, and so likewise is usually depicted holding a large Book. Whether in portrait or in Icons depicting Biblical scenes, Matthew has long, wavy, white beard and closer-cropped hair. As a deliberate anachronism to aid identification, he may also be shown holding the Gospel Book in Icons with Christ depicting Biblical scenes. Matthew may sometimes be shown with a winged man, the symbol associated with his Gospel.

Andrew, the brother of the Apostle Peter, was formerly a disciple of St. John the Baptist. Because of this, Andrew is depicted with long unkempt hair, in the manner of the prophet he followed. This makes him one of the most recognizable of Apostles when depicted in scenes showing Jesus’ earthly ministry. Andrew holds a small scroll not to indicate he authored any famous works, but to identify him as a preacher of the Gospel, “one who is sent out”, i.e. an Apostle.

Bartholomew, also known as Nathaniel, is shown as a middle-aged man, with short beard and hair. He is also shown holding the scroll of an Apostle. After his martyrdom, St. Bartholomew has appeared to a number of people in vision and dream, so his appearance can be deduced. He has appeared to St. Joseph the Hymnographer, blessing him that he might be able to sing spiritual hymns, saying, “Let heavenly water of wisdom flow from your tongue!” He also appeared to Emperor Anastasius I (491-518) and told him that he would protect the new town of Dara.

Not to be confused with St. Peter, who was previously named Simon bar-Jonah, the Apostle Simon was from Cana, and is the bridegroom of the famous Wedding at Cana. He is always shown with grey curly hair and beard, though with a higher forehead than St. Peter.

The Apostle Thomas is most famously known as “Doubting Thomas”, on account of his refusal to believe the accounts of the other disciples that Christ had risen. Often maligned for this, in Orthodox teaching it is recognized that through his initial doubts, Thomas came to confess Jesus Christ as “Lord and God” – a greater confession of faith than any of the Apostles had previously uttered. Sometimes this confession of faith is held in Thomas’ hands in icons depicting him, though more commonly it is the scroll denoting his rank of Apostle that is shown. The most striking thing about the Icons of Thomas is that he is shown as a beardless youth, a teenager as John was. This is a consistent feature of how Thomas is shown in icons, as in this Icon of Thomas touching the wounds of Christ. 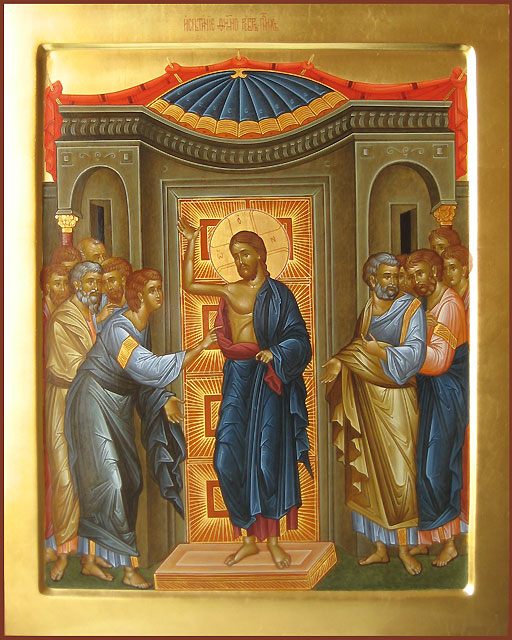 The youthfulness of the Apostle Thomas is something worthy of consideration when thinking about his “doubts”.

There are two Apostles named James. The son of Zebedee is the James often nicknamed “the Greater” in the West. This is largely because among the Twelve he was part of the “inner-circle” which also contained St. Peter and St. John. The Apostle John is also the brother of James and together they were known as the “Sons of Thunder”. James is shown with medium length brown hair and beard. Though often difficult to identify by sight alone in Icons of the Twelve, he is recognizable in the bottom-right of this Icon of the Transfiguration,which along with the young John and curly-haired Peter, James was privileged to witness.

He is depicted as a young man (short beard, not white) in all icons, as he never got to live to an old age, being martyred a little over 10 years after the Resurrection.

Jude is also sometimes called Levi or Thaddeus, and “Jude” is sometimes rendered Judas. Nevertheless, he is not to be confused with the Apostle Matthew (also called “Levi”), St. Thaddeus one of Jesus’ seventy disciples, or especially Judas Iscariot. The author of the Biblical Epistle which carries his name, the “Apostles’ Scroll” in his hand may sometimes show a quote from his own writing. Otherwise, St. Jude is identified as a mature man with curly brown (sometimes grey) beard and hair. As he was related to Jesus Christ through Joseph, husband of Mary, the appelation “brother of the Lord” (or “adelphos” in Greek) may be found on Icons.

The son of Alphaeus and the brother of the Apostle Matthew, James is shown with brown wavy or curly hair and a pointed beard. He is not to be confused with St. James “Adelphos”, which means “brother of the Lord”. In iconography, the two Jameses are easily distinguished, as “the brother of the Lord” is always shown in the robes of a bishop, being the first bishop of Jerusalem. Here is an Icon of James Adelphos.

Holy Tradition and Scriptures maintain that the Apostle Philip was well versed in the Old Testament prophecies, and eagerly awaited the coming of the Saviour. He immediately responded to the call of Jesus, and recognized him as the Messiah (John 1:43); and subsequently led Nathaniel (the Apostle Bartholomew) to become a follower of Jesus too. Therefore it is remarkable to come into contact with icons of the Apostle Philip – who is always shown as beardless youth. Like the youthfulness of Thomas, it is something worthy of consideration.

Matthias is the disciple of Christ who replaced Judas Iscariot as one of the Twelve Apostles after the latter’s betrayal and suicide. His appearance in icons is entirely in keeping with what is known about him. Schooled in the Law by the Prophet Simeon, who received the infant Christ in the temple, Matthias was already a man of maturity before becoming a disciple of the adult Christ. By the time of his martyrdom in 63A.D., Matthias would be the elderly man depicted in Icons of him.


Whilst Judas is obviously not a saint, and isn’t shown in icons of “the Twelve”, he is nevertheless depicted in icons of the Last Supper or else kissing Christ in the Garden of Gethsemane. In icons of the Last Supper he is easily recognizable as the one dipping his hand into the dish, thus revealing his future betrayal of the Lord. Often, the Apostles are not shown with halos in scenes prior to Pentecost, but needless to say when they are shown with halos, Judas is conspicuous by not having one.


Whatever it may be worth – and it may be worth nothing – in Orthodox Iconography Judas is almost always shown beardless, like John, Philip, and Thomas; thus, like them, he was perhaps still a teenager at the time he betrayed his Saviour.
Posted by Tom Manakis at 10/07/2014 10:18:00 am

Email ThisBlogThis!Share to TwitterShare to FacebookShare to Pinterest
Labels: Icons, The Holy Apostles