St. John the Damascene-On Angels, their Creation, Essence and Nature 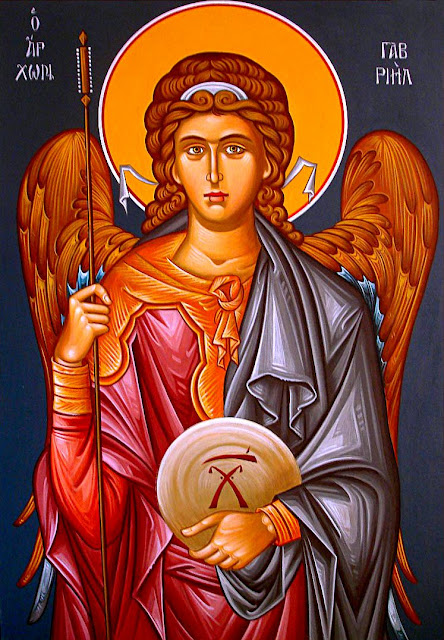 By St. John the Damascene, from “An Exposition of the Orthodox Faith.”


God is Himself the Maker and Creator of the angels; He brought them out of nothing into being and created them after His own image, an incorporeal race (having no material body or form, Ed.), a sort of spirit or immaterial fire. In the words of the divine David, He maketh His angels spirits, and His ministers a flame of fire. And He has described their lightness and the ardour, and heat, and keenness and sharpness with which they hunger for God and serve Him, and how they are borne to the regions above and are quite delivered from all material thought.


An angel, then, is an intelligent essence, in perpetual motion, with free-will, incorporeal, ministering to God, having obtained by grace an immortal nature; and the Creator alone knows the form and limitation of its essence. But all that we can understand is, that it is incorporeal and immaterial. For all that is compared with God Who alone is incomparable, we find to be dense and material. For in reality only the Deity is immaterial and incorporeal.
The angel’s nature then is rational, and intelligent, and endowed with free-will, change, able in will, or fickle. For all that is created is changeable, and only that which is uncreated is unchangeable. Also, all that is rational is endowed with free-will. As it is, then, rational and intelligent, it is endowed with free-will; and as it is created, it is changeable, having power either to abide or progress in goodness, or to turn towards evil.
It is not susceptible of repentance because it is incorporeal or uncarnate, i.e., without the nature of a body or substance. For it is owing to the weakness of his body that man comes to have repentance.
It is immortal, not by natures but by grace. For all that has had beginning comes also to its natural end. But God alone is eternal, or rather, He is above the Eternal; for He, the Creator of times, is not under the dominion of time, but above time.
They are secondary intelligent lights derived from that first light which is without beginning, for they have the power of illumination; they have no need of tongue or hearing, but without uttering words they communicate to each other their own thoughts and counsels.

Through the Word, therefore, all the angels were created, and through the sanctification by the Holy Spirit were they brought to perfection, sharing each in proportion to his worth and rank in brightness and grace.
They are circumscribed; for when they are in the Heaven they are not on the earth; and when they are sent by God down to the earth they do not remain in the Heaven. They are not hemmed in by walls and doors, and bars and seals, for they are quite unlimited. Unlimited, I repeat, for it is not as they really are that they reveal themselves to the worthy men to whom God wishes them to appear, but in a changed form which the beholders are capable of seeing. For that alone is naturally and strictly unlimited which is un-created. For every created thing is limited by God Who created it.
Further, apart from their essence they receive the sanctification from the Spirit; through the divine grace they prophesy; they have no need of marriage for they are immortal.
Seeing that they are minds, they are in mental places, and are not circumscribed after the fashion of a body. For they have not a bodily form by nature, nor are they tended in three dimensions. But to whatever post they may be assigned, there they are present after the manner of a mind and energize accordingly; however, they cannot be present and energize in various places at the same time.
Whether they are equals in essence or differ from one another we know not. God, their Creator, Who knoweth all things, alone knoweth. But they differ from each other in brightness and position, whether it is that their position is dependent on their brightness or their brightness on their position; and they impart brightness to one another, because they excel one another in rank and nature. And clearly the higher share their brightness and knowledge with the lower.
They are mighty and prompt to fulfill the will of the Deity, and their nature is endowed with such celerity that wherever the Divine glance bids them there they are straightway found. They are the guardians of the divisions of the earth; they are set over nations and regions, allotted to them by their Creator; they govern all our affairs and bring us succour (help or assistance, especially in time of difficulty). And the reason surely is because they are set over us by the divine will and command and are ever in the vicinity of God.
With difficulty they are moved to evil, yet they are not absolutely immoveable; but now they are altogether immoveable, not by nature but by grace and by their nearness to the Only Good.
They behold God according to their capacity, and this is their food.
They are above us for they are incorporeal, and are free of all bodily passion, yet are not passionless; for the Deity alone is passionless.
They take different forms at the bidding of their Master, God, and thus reveal themselves to men and unveil the divine mysteries to them.
They have Heaven for their dwelling-place, and have one duty, to sing God’s praise and carry out His divine will.
Moreover, as that most holy, and sacred, and gifted theologian, Dionysios the Areopagite, says, all theology, that is to say, the holy Scripture, has nine different names for the heavenly essences. These essences are divided into three groups, each containing three. And the first group, he says, consists of those who are in God’s presence and are said to be directly and immediately one with Him, viz., the Seraphim with their six wings, the many-eyed Cherubim and those that sit in the holiest Thrones. The second group is that of the Dominions, and the Powers, and the Authorities; and the third, and last, is that of the Rulers and Archangels and Angels
Some, indeed, like Gregory the Theologian, say that these were before the creation of other things. He thinks that the angelic and heavenly powers were first and that thought was their function. Others, again, hold that they were created after the first heaven was made. But all are agreed that it was before the foundation of man. For myself, I am in harmony with the theologian. For it was fitting that the mental essence should be the first created, and then that which can be perceived, and finally man himself, in whose being both parts are united.
But those who say that the angels are creators of any kind, they are the mouth of their father, the devil. For since they are created things they are not creators. But He Who creates and provides for and maintains all things is God; He is the only One Who alone is uncreated and is praised and glorified in the Father, the Son, and the Holy Spirit.

The Fallen Angels, the Devil and Demons

He who from among these angelic powers was set over the earthly realm, and into whose hands God committed the guardianship of the earth, was not made wicked in nature but was good, and made for good ends, and received from his Creator no trace whatever of evil in himself. But he did not sustain the brightness and the honour which the Creator had bestowed on him; his free choice was changed from what was in harmony to what was at variance with his nature, and became roused against God Who created him, and determined to rise in rebellion against Him; and he was the first to depart from good and become evil.
Evil is nothing else than absence of goodness, just as darkness also is absence of light. Goodness is the light of the mind, and, similarly, evil is the darkness of the mind. Light, therefore, being the work of the Creator and being made good (for God saw all that He made, and behold they were exceeding good) produced darkness through free-will. But along with him (the devil) an innumerable host of angels subject to him were torn away and followed him and shared in his fall. Wherefore, being of the same nature as the angels, they became wicked, turning away at their own free choice from good to evil.
Hence they have no power or strength against any one except what God in His dispensation hath conceded to them, as for instance, against Job and those swine that are mentioned in the Gospels. But when God has made the concession they do prevail, and are changed and transformed into any form whatever in which they wish to appear.
Of the future both the angels of God and the demons are alike ignorant; yet they make predictions. God reveals the future to the angels and commands them to prophesy, and so what they say comes to pass. But the demons also make predictions, sometimes because they see what is happening at a distance, and sometimes merely making guesses; hence much that they say is false and they should not be believed, even although they do often, in the way we have said, tell what is true. Besides they know the Scriptures.
All wickedness, then, and all impure passions are the work of their mind. But while the liberty to attack man has been granted to them, they have not the strength to over master any one. We all have it in our power to receive or not to receive the attack. Wherefore there has been prepared for the devil and his demons, and those who follow him, fire unquenchable and everlasting punishment.
Note, further, that what in the case of man is death is a fall in the case of angels. For after the fall there is no possibility of repentance for them, just as after death there is for men no repentance.